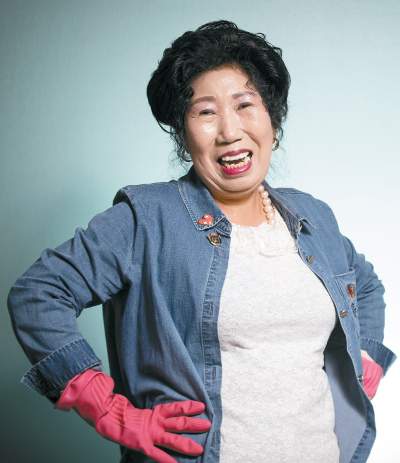 Park Mak-rye, a 72-year-old YouTube influencer, poses for the camera at the JoongAng Ilbo office in Jung District, central Seoul, on May 27. [KWON HYUK-JAE]

YouTube star Park Mak-rye is enjoying the prime of her life at age 72, as her channel has become a hit for her straightforward and often snappy remarks.

Park goes by the handle “Korea Grandma” and has over 900,000 subscribers to her YouTube channel. This is thanks to her granddaughter Kim Yu-ra, 29, the mastermind behind all the buzz. After Park heard from a doctor that she would likely suffer from dementia in the future, her granddaughter quit her job to spend quality time in Australia with her grandmother.

Kim started uploading videos of their trip and recorded videos of her grandmother’s everyday life. A video of Park applying makeup put her in the spotlight in 2017, as the video boosted her subscribers from 18 to 180,000 in just two days.

In March, Park met YouTube CEO Susan Wojcicki and held a talk show, which was uploaded on her YouTube channel.

Now, Park is getting invitations from countries around the world and was recognized by Google CEO Sundar Pichai when she was invited to the Google I/O 2019 developer conference in Mountain View, California in May. At the event, guests attended talks, got hands-on learning with Google experts and got a first look at Google’s latest developer products. After the two embraced each other, Pichai said her story was more inspiring than anyone that he had ever seen.

The JoongAng Ilbo sat for an interview with Park and Kim at the newspaper’s office in Jung District, central Seoul, on May 27, to hear Park’s life story and journey to fame in an industry dominated by millennials.

Park’s life was not always this exciting. Park was born in 1947, the youngest daughter of a family of eight, which is why she is called Mak-rye, a twist on the Korean word maknae, which means youngest sibling. Her two brothers died during the 1950-53 Korean War, leaving the family without a male heir. Park said she and her sisters did not get a proper education as her father thought it was unnecessary. They instead tended to the house.

Park married at 19 years old. Unfortunately, her husband left her after she gave birth to their third child. Park had to raise all three children on her own by taking any job that came to her - housekeeping, serving food at restaurants and selling merchandise out of handcarts.

“It was a miserable life,” said Park. “The thing I am most proud of during my life is raising my children until the end and not leaving them, even in those challenging situations. I have nothing to boast about myself, but I am proud of that one thing.”

“[Uploading videos on] YouTube showed me that there is a world such as this,” said Park. “I would have been resentful if I didn’t do this and died without knowing anything.”

Park recently published a book with her granddaughter about her life story with a title that translates to English as “Park Mak-rye, I cannot die like this.” The book went on sale last Monday.

“I think that I was rewarded with a granddaughter like her because I never did a mean thing to another person in my whole life,” said Park.

Kim said that she did not want to live like her grandmother, as Park had to work for her father, husband and children all her life.

“I thought that life was really unfair, and I couldn’t just leave my grandmother to die like this,” said Kim.

When Park was asked how she was able to get through the hard times in her life, she said it was because of her personality.

“No matter how hard it was, I could [get back up] thanks to my personality that lets me dust my problems off and stand up,” said Park. She said that once, after she was scammed out of a great amount of money, she regained her composure after two hours, as it was better than one of her children getting hurt.

Park said she wants to live each day happily, without any long-term goal or dream.

When Park was asked what she would do if she were born again, she said, “I don’t know about anything else, but I won’t be marrying.”

“I have never been happy while I was married and it destroyed my life. I thank Buddha for giving me this [second chance] at an age over 70,” Park added.

Park advised young adults to never give up hope.

“Hope is not anyone else’s, but mine, so if you have thrown it out, go pick it back up,” said Park. “You never know what life will give you until the end.”