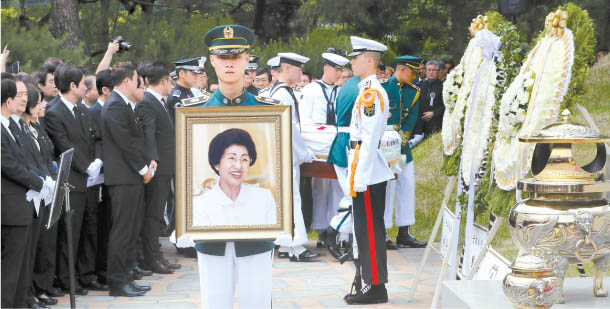 The coffin of the late Lee Hee-ho is buried next to her husband, the late President Kim Dae-jung, in the National Cemetery in Dongjak District, southern Seoul, on Friday. [JOINT PRESS CORPS]

The country bid a final farewell to Lee Hee-ho, feminist pioneer, democracy champion and widow of former President Kim Dae-jung, as she was laid to rest on Friday alongside her late husband at the National Cemetery.

“We are saying goodbye to an era,” Prime Minister Lee Nak-yon said in his eulogy at the cemetery. “We are bidding farewell to Madame Lee, who had tenaciously overcome the turmoil of Korea’s modern history.”

Lee passed away on Monday at the age of 96.

Remembering the late Lee as a trailblazer, the prime minister said she was the vital force behind her husband’s many achievements. She married Kim in 1962 and supported him throughout his political life, while continuing her activism for women’s rights and democracy in Korea.

“After her husband passed away 10 years ago, she continued his work left unfinished.” Lee continued, “She visited North Korea two more times and created a scholarship fund for students of the Jeolla and Gyeongsang regions.

About 2,000 guests, including her family, top government officials, politicians and ordinary people, attended the ceremony. Speeches were given by National Assembly Speaker Moon Hee-sang, as well as leaders of five political parties.

“The efforts and sacrifices Madame Lee made with former President Kim Dae-jung for reconciliation and unity of the Korean people and peace and unification of the country, despite various hardships and turmoil, are valuable foundations for the current inter-Korean relations to achieve independent unification and prosperity,” the message said.

After the guests laid flowers at the ceremony, the late Lee was buried in the same grave as Kim. A small family service took place at the grave before the burial.

The funeral procession began at 6:30 a.m. at Severance Hospital, where Lee spent her final months. At Changcheon Methodist Church in Sinchon-dong, western Seoul, where she attended services throughout her life, a funeral service took place at 7 a.m. At the service, former acting Prime Minister Chang Sang remembered Lee as a “feminist activist and social advocate of our time, who had intelligence, love, historical awareness and vision.”

The funeral procession then headed to Lee’s residence in Donggyo-dong, western Seoul, where she lived for over 50 years. Kim Jong-dae, Lee’s grandson, held her portrait and visited the house and office at the Kim Dae-jung Library. Outside the residence’s main gate, two nameplates of the late presidential couple were hung next to each other, a symbol their lifetime partnership.