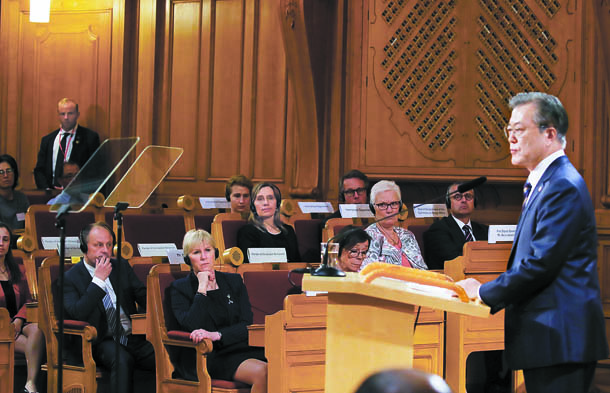 Urging Pyongyang to show the international community its intention to denuclearize, President Moon Jae-in said Friday that Seoul is willing to promote inter-Korean cooperation projects as a vehicle to peace.

Moon made the pledge in speech at Sweden’s Parliament House. The speech, entitled “Trust for Denuclearization and Peace on the Korean Peninsula,” was Moon’s second major address on North Korea during a three-nation trip to Northern Europe. He gave the first speech at the Oslo Forum earlier this week.

“North Korea must substantially show the international community its commitment to completely dismantle its nuclear weapons and establish a peace regime,” Moon said. “Dialogue with the outside world, whether they are bilateral or multilateral, must go on until North Korea earns the trust of the international community. In addition, North Korea must build peace from inside and prove it by expediting exchanges and cooperative projects previously agreed to by the two Koreas.

Moon said the North will face more possibilities for economic prosperity if it restores the confidence of the international community by working with the South.

“Once the two Koreas develop into a common economic community, with North Korea free from international sanctions, the Korean Peninsula will facilitate further peace in Northeast Asia and become a place where Asia’s potential is realized,” Moon said. “The South and North can prosper together.”

Currently, no inter-Korean economic project is active because of international sanctions imposed on the North for its nuclear and missile programs and tests.

Two conservative predecessors of Moon shut down major inter-Korean projects during their tenures. Mount Kumgang tours were suspended in 2008 by the Lee Myung-bak administration following the shooting death of a South Korean tourist. Former South Korean President Park Geun-hye pulled the plug on the Kaesong Industrial Complex in 2016 after the North’s fourth nuclear test.

In addition to promising a rosy future of prosperity, Moon also tried to convince the young North Korean ruler that the security of his regime will be guaranteed as long as he commits to dialogue.

“If North Korea takes the path of dialogue, no one would threaten the political system or safety of North Korea,” Moon said. “North Korea must believe that every problem will be solved by dialogue and trust its dialogue partners.”

The speech was delivered as hopes grow for a third North Korea-U.S. summit. Nuclear negotiations between Pyongyang and Washington stalled after a second summit between North Korean leader Kim Jong-un and U.S. President Donald Trump ended without a deal in February. Moon has been urging Kim to accept a fourth inter-Korean summit before Trump’s visit to Korea after the Group of 20 Summit in Japan on June 28-29.

“It is up to Kim to decide when the talks will resume, and I hope it won’t be too late,” Moon said after the speech.

The Blue House was sanguine about inter-Korean dialogue. “You have to pay attention to the fact that Kim Yo-jong, [the younger sister of the North Korean leader], was dispatched,” a senior presidential aide said Friday. “Regardless of her title, she carries a different level of symbolism and representation.”

On Wednesday, the North sent Kim Yo-jong, a senior Workers’ Party official, to the border village to Panmunjom to pay condolences on the death of Lee Hee-ho, widow of former South Korean President Kim Dae-jung.

The official said the North had asked a responsible official to receive her, and she delivered a message saying the two Koreas must remember the late Lee’s efforts for reconciliation and cooperation. “Taking into account everything, there are enough signs to interpret that [the North] has an intention to have inter-Korean talks,” he said.

Later that day, Moon was scheduled to visit telecommunication giant Ericsson. He arrived in Stockholm Thursday night for a three-day state visit after visiting Finland and Norway. He will return to Korea on Sunday.