Africa tells Korea to get on board

Africa tells Korea to get on board 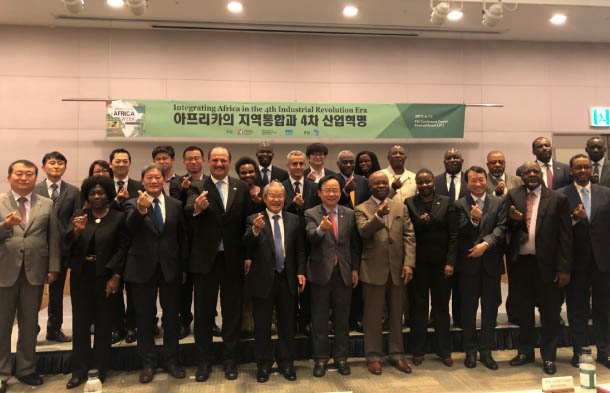 Members of the African Group of Ambassadors in Korea, including Carlos Victor Boungou, ambassador of Gabon to Korea and dean of the group, Hazem Fahmy, ambassador of Egypt to Korea, Kwon Tae-shin, vice president of Federation of Korean Industries (FKI), and Liberty Korea Party Rep. Lee Ju-young, deputy speaker of the National Assembly and president of the Assembly’s Africa New Era Forum, pose at the Africa Business Seminar held at the FKI in western Seoul on Thursday. [ESTHER CHUNG]

Korea should partner with Africa on fourth industrial revolution technology, a group of ambassadors said at the Africa Business Seminar on Thursday.

“Africa has ideal conditions for steady economic growth, with a predominantly young population,” said Carlos Victor Boungou, ambassador of Gabon to Korea and dean of the African Group of Ambassadors in Korea. “The Republic of Korea is a leader in new technologies in the context of the fourth industrial revolution… this calls for a win-win strategic partnership.”

The African Group of Ambassadors in Korea, the Korea-Africa Foundation and the Federation of Korean Industries (FKI) hosted the seminar themed “Integrating Africa in the Fourth Industrial Revolution Era” at the FKI headquarters in Yeouido, western Seoul, on Thursday.

The seminar was hosted as part of Africa Week, a week-long program of African film screening, music and dance festivals and business seminars organized in Seoul from Wednesday to Friday by the African Group of Ambassadors to commemorate Africa Day, which is marked annually on May 25.

“We will be reaching a milestone on July 7 with the launch of the African Continent Free Trade Agreement (AfCFTA),” Boungou said. “The FTA is a message from the continent saying that it is committed to multilateralism and global interdependence.”

Forty four member states of the African Union signed the AfCFTA in Kigali, Rwanda, on March 21, 2018.

“It is the largest FTA created since the establishment of the World Trade Organization 1995,” said Hazem Fahmy, ambassador of Egypt to Korea. “This kind of potential should not be overlooked by any country or companies looking for forward progress.”

In market terms, Africa consists of 54 countries that are home to 1.27 billion people. The population is expected to grow to 1.7 billion by 2030, according to the top envoy of Egypt, the country chairing the African Union this year.

The African Group of Ambassadors in Korea stressed the youthfulness of the population of Africa.

By 2050, the continent is expected to have the largest number of young people - those under the age of 25 - compared to other continents, according to a report by the Bill and Melinda Gates Foundation last year.

“Africa is a youngest continent in terms of the population age structure and it is rich in natural resources,” Fahmy said. “Korea needs this market space and labor support, while Africa needs the infrastructure and knowledge-sharing. We find we have perfect matching needs between Korea and Africa.”

“According to the World Bank, if Africa integrates IT development, the growth rate of the continent can hit double-digit figures very quickly,” said Kwon Tae-shin, vice president of the FKI. “I do hope Africa will become the engine of global growth in partnership with Korea’s IT skills and knowledge.”

Diplomats at the seminar urged Korea to look beyond its business partners in the United States and China, especially in midst of their escalating trade war.

“Korea recognizes its need for market diversification and even more so lately as the United States and China - its largest trading partners - are embarking on a serious trade war,” Fahmy said.

“When President Moon [Jae-in] came into office, he laid out 100 tasks to carry out during his administration, which included his New Southern Policy toward Southeast Asian partners and India, as well as his New Northern Policy toward Russia, Mongolia and Central Asian countries,” he said. “But I think a third pillar is needed for Korean foreign policy, namely, the African policy. Korea should be looking beyond its immediate neighbors for obvious reasons and you have a perfect partner in us.”