Solbi uses art to come to peace with pain: The singer-turned-painter continues her ‘Hyperism’ color series with violet

Solbi uses art to come to peace with pain: The singer-turned-painter continues her ‘Hyperism’ color series with violet 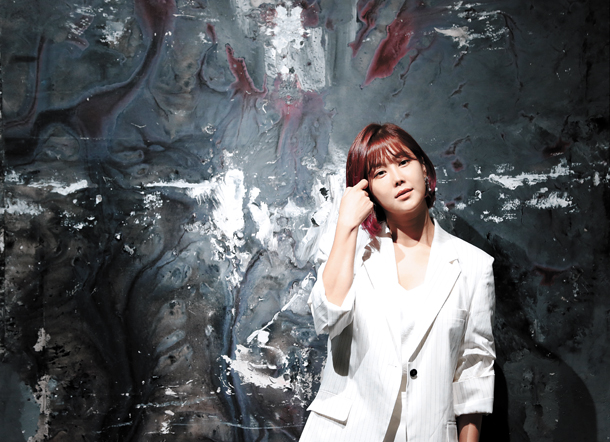 Singer Solbi, whose real name is Kwon Ji-an, made a successful transition to painting in 2012 with her first solo exhibition. She is now celebrating the opening of her fourth solo exhibition “Real Reality,” which will run for two weeks at the Insa Art Center in Insa-dong, central Seoul, until June 23.

On Thursday, Kwon gave a tour of her exhibition to the local press, introducing her work and talking about her 13-year career as a singer.

“I wasn’t really sure about who I was myself before I started painting,” said Kwon. “I didn’t know what I was good at or what I wanted to talk about. But I found out while I was painting that I was more a serious person than I thought I was. I got to talk about my true self and become more honest about myself. I think the biggest part of me that changed through everything is that I’ve gotten to be able to show who I truly am.”

Solbi debuted as a part of trio Typhoon in 2006 and had a successful career until 2009, when a fake sex video of her spread online.

The perpetrators, five teenagers who did it “for fun,” were found two years later. Hurt by the false scandal, she took time off from people and picked up the brush for solace in 2010.

“I was hurt so many times because of rumors and comments that were aimed at me because I was a celebrity,” said Kwon.

“I couldn’t stop the rumors from spreading like a virus online. There was no way for me to stop it, so I let those scars out through art.”

In 2015, Kwon started her “Hyperism” series, in which she used a certain color as a theme and used that color to tell a side of her story she never had the chance to tell before. It started with red, then continued with blue and violet.

With red, she expressed the scars inflicted on her as a woman, blue was used to point out the coldness that comes from disparities between social classes and finally she used the color violet to talk about the bruises that the heart bears when it goes through love and a breakup.

The abstract paintings convey emotions that are common to all people.

“I met the president of my current company [at Sidus HQ] and asked for advice on how I could become a real painter and artist,” Kwon said. “He told me to find a way to connect my works to my life. Then I realized that I was a singer and that I had always dreamt of becoming a celebrity my whole life. So I decided to paint my music. I did what I thought was best on the canvas, which was to perform.”

This exhibition is her first in three years. During the break, she took time to look back at herself and really accept the things that she couldn’t before.

“I felt those three years just fly by. And this theme demanded that I look back at myself and talk about who I really am, so that I could really bring out the story of how I was hurt and came to be healed. I think I matured quite a lot while working on the series. I was nervous, but now I feel proud,” she said.

She added, “I couldn’t even bring out the works from the ‘Red’ series for a year because it really hurt me. Some people who saw the pieces said that it wasn’t the Solbi they knew, but that’s who I really am. It was difficult for me to face my scars, but I managed to do it a year after I finished the ‘Blue’ series.”

With the “Red” series, she talked about herself and how she was hurt, she turned that perspective on to the larger world with “Blue,” then came to peace with it all through “Violet.”

“I thought that, just as I had been hurt, there would be other people who would have been hiding their scars. I hoped that they would come forward like I did. Then I gained confidence while thinking that, and went on to think about class divisions in society with ‘Blue.’ We witness so many problems, such as the ones that I saw in the entertainment industry. I talk about society, but it’s also my story,” she said.

“With ‘Violet,’ I started with the question, ‘What do I want to do?’ Then I took away everything I had from before, and went back to the basics […] It contains the story of how society hurts us, but we heal ourselves in the end. I was healed, and I hope it heals others too,” she added.

Being a celebrity has both advantages and disadvantages for Kwon as an artist. She can get people to listen to her stories, but it’s hard to get across to them who she really is inside. However, she opened the exhibition as Kwon Ji-an, not Solbi, to show her sincerity as a person.

“I want everyone to focus on my works without any prejudice - I would like to become a real artist,” she said. “It’s my goal to have my work out in the world. I think I will have a lot of opportunities to travel abroad. I hope that more people will be able to see eye to eye with me. I want to be remembered as a person who has shared a memorable part of themselves. I like the phrase ‘being me,’ and I want to praise everyone for being themselves.”

On Wednesday, Solbi dropped a new single, titled “Hyperism Violet,” ahead of the opening of her exhibition.

The track and the performance video were released online, and the artist recommends that the audience listen to the track and watch the video, as well as visit the exhibition so they can take in her artistic work as a whole.

“It took me a lot of time to make the music, the choreography and the work,” she said. “I’m still careful about calling myself an artist, but I will work hard enough so that title comes naturally one day.”