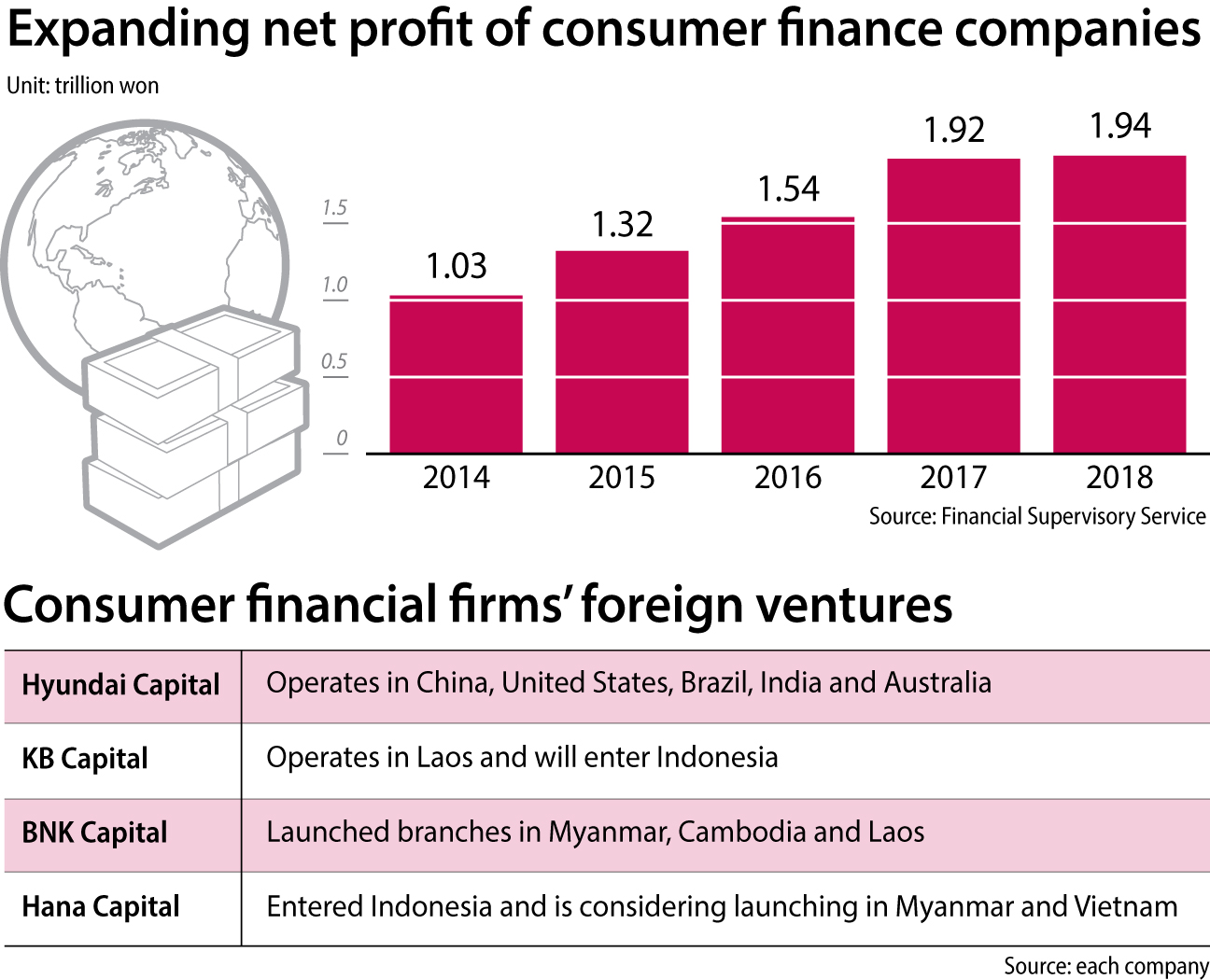 Consumer finance companies in Korea have seen stellar growth in recent years, but many of the lenders are now poised to expand their standing abroad as the market saturates and regulations grow stricter at home.

Driven by robust demand for special loans like car loans, the total assets of the top 25 financial services firms increased by nearly 10 trillion won ($8.5 billion) each year since 2013 to reach 119.4 trillion won last year, according to the Financial Supervisory Service.

Their profitability also grew, with annual net profit of all registered consumer lenders almost doubling between 2014 and 2018 to hit 1.94 trillion won.

The country’s financial regulator is also set to impose tougher loan screening process to non-bank lenders, which could contract demand for loans.

The lenders are scrambling to offset these factors by tapping into new markets.

Many consumer finance companies are still in the early stage of launching overseas branches and services. Hyundai Capital, the country’s top consumer lender and an affiliate of Hyundai Motor Group, took an early shot 10 years ago.

At first, the target countries were mainly advanced economies - including the United States, Europe and Britain - but later added emerging markets such as China and Brazil. The financial firm now runs 11 operations outside of Korea in 10 countries with a focus on auto financing for Hyundai Motor and Kia Motors customers.

As a result, total assets of overseas units are higher than the Korean operation as of the end of 2018, as foreign branches managed 43 trillion won compared to 27 trillion won in Korea.

The most recent push is a joint venture with Santander Brasil, a subsidiary of Spanish banking giant Santander Group.

The joint venture, dubbed Banco Hyundai Capital Brasil, will operate in Brazil and serve as a stepping stone for the Korean company in the region, according to Hyundai Capital.

A spokesperson at the company cited the large size of the Latin American market and high growth potential as the reason for the move.

“Brazil is one of the major countries in South America with 200 million people in a geographical area,” the spokesperson said.

But the path for global expansion has been rough in some regions due to strict regulations.

Hyundai Capital opened an office in Beijing in 2005, but it took seven more years to actually operate there.

After sifting through China’s financial regulatory conditions, the company partnered with Beijing Automobile Investment in 2012 to form a joint financial company.

The key to success in overseas markets lies in thorough analysis of the market and localization to tailor the approach to lending.

“Strategic importance is evaluated by market scale, geographical location, and the current status of the Hyundai Motor and Kia Motors business,” the spokesperson said. “Ease of market penetration takes the regulatory environment, financial infrastructure and status of competitors into consideration.”

Other companies have a smaller overseas presence compared to Hyundai, but its peers are gearing up for global expansion in a bid to address the rough market conditions in Korea.

Indonesia is KB’s second foreign market after entering Laos in 2016.

Hwang Soo-nam, chief executive of KB Capital, said that its Indonesian financing firm will serve as a stepping stone into the broader Southeast Asian region.

“We’ve entered Indonesia, a large market with the world’s fourth largest demographics and GDP ranking at 16th,” Hwang said. “The entrance will provide us an opportunity to penetrate other Southeast Asian countries.”

Hana Capital, a consumer finance arm of Hana Financial Group, also took aim at the Indonesian market back in 2015 through a partnership with Sinar Mas Group, Indonesia’s financial unit whose businesses encompass manufacturing and real estate.

Its Indonesian unit turned a profit in 2018.

BNK Capital, a subsidiary of BNK Financial Group, has boosted its presence in overseas markets starting with Cambodia and Myanmar in 2014. The businesses were focused on micro-financing in both countries, BNK expanded into car loans in Laos in 2015.

Most recently, the company set up a consumer finance subsidiary in Almaty, Kazakhstan, last year.