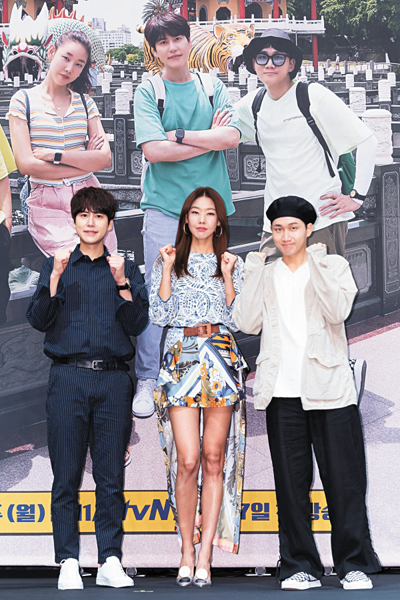 From left, Kyuhyun, Han Hye-jin and Lee Yong-jin, stars of the second season of the tvN travel series “Thrifters on Tour: Way to a Thrifter’s Heart” attend a press conference for the show with producer Ahn Je-min on Tuesday in Sindorim, western Seoul. [TVN]

Cable channel tvN’s travel show “Thrifters on Tour: Way to a Thrifter’s Heart” is back for a second season with a new cast: While comedian Park Myung-soo has returned, the new recruits include comedian Lee Yong-jin, model-turned-entertainer Han Hye-jin and singer Kyuhyun.

The gist of the program hasn’t changed - the group will travel for four days in each country under a tight budget. In this season, however, there is a slight twist: members will also get a chance to enjoy small luxuries, like special meals or accommodations, if they succeed in a nearly-impossible mission given to them by the producers.

The cast’s first stop this season was Kha Shing, Taiwan, with Han as the guide and special guest Hwang Kwang-hee joining the team. The show was initially set to air on Saturday night, but was changed to Monday. When asked about the alternation to the airing schedule, director Ahn Je-min replied that one of the main reasons was to provide viewers with a fresh traveling show on Monday night to start off their week. “Although there are many other variety shows airing at the same time, I don’t necessarily see them as competition because I believe that ‘Thrifters on Tour’ stands out from the others.”

Ahn elaborated that although he felt pressure to make the second season as good as the first, his burden was considerably lightened when the cast was finalized. “The members are all are veteran travelers, but they each have very different attitudes and styles when it comes to traveling,” Ahn said. “It would be fun to watch each member become a guide and watch others adapt to their different styles.”

“Some of the viewers might worry that since we are so different, we wouldn’t get along,” said Han. “But I’ve actually learned a lot from other members’ different traveling methods. For instance, when I travel by myself I couldn’t stand to be in a line waiting for a restaurant. But as I was doing this show, waiting in line with other members to go to a delicious restaurant on a limited budget, I’ve come to realize that there is a reason why people wait in lines and decided that the wait was worth it.”

Kyuhyun, who is freshly discharged from military, said that the program’s motive suited him. “When I travel alone, I like to visit areas [outside of the tourist spots]. I usually like to climb up somewhere high to admire nature. With the members, I’ve also learned to appreciate the history and traditions of the place too.”

The cast all agreed that although it was their first time on a show together, their chemistry was almost instantaneous. “All of us wondered how we could become so close by just traveling together for a day,” said Han. “Viewers will also be able to feel that from the second day.”

When asked to share a funny anecdote from their first trip, Lee shared a story that showed how close the cast has become. “It was really hot and humid in the city,” Lee joked. “All of us were sweating, but Kyuhyun was sweating like crazy. So I called him ‘Aquaman.’ It’s almost miraculous to see how much liquid he can produce from his body.”