Rep. Sohn Hye-won was indicted on Tuesday for using inside information to speculate on real estate in the South Jeolla city of Mokpo.

Sohn is accused of using classified information on the city development plans of the Mokpo city government to buy real estate worth about 1.4 billion won ($1.18 million) included in the plan, the prosecution announced Tuesday. Some of the property was bought under different names, including her niece’s. 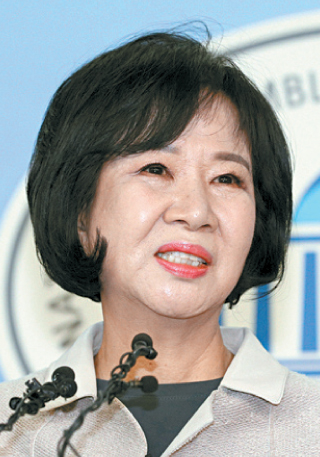 Prosecutors believe that Sohn, a former member of the ruling Democratic Party (DP), bought the real estate and planned to sell it once prices rose following urban development in the area.

Utilizing confidential government information to make money in real estate is forbidden, according to the Act on the Prevention of Corruption and the Establishment and Management of the Anti-Corruption and Civil Rights Commission, which states, “No public official shall use any confidential information learned while conducting his/her duties to obtain, or to have a third party obtain, goods or property gains.”

Violations of the law can be punished by a fine of up to 70 million won or be sentenced to up to seven years in prison. All or part of the illegal gains can be confiscated.

“The Mokpo city government officials shared the information about urban development with Sohn, because she was a lawmaker and they wished to get her support for the project,” a prosecutor told the JoongAng Ilbo. “But Sohn used the information for her personal gains.”

The prosecution also said that Sohn bought around 72 million won worth of real estate under the name of her niece.

“Sohn was the one who found the real estate, signed the contracts and made decisions and plans about the real estate,” the prosecutor said. “We found evidence that Sohn paid for all of them [under a different name].”

Sohn previously told the press that if she was found to have used another person’s name to buy real estate illegally, she would forfeit all of the real estate she bought in that way.

Sohn was also accused of influencing the city government to decide which areas to choose for real estate development, but the prosecution did not find evidence for the allegation.

“She was reported the city development plan but she did not abuse her position as a lawmaker to influence the decisions regarding the selection of areas for development,” said the prosecutor.

Sohn posted on her Facebook account on Tuesday that she will “state [her] case during the trial.”

“The prosecution has decided to indict me, so I will state my case during the trial,” she said. “My position, that should I be found to have obtained the real estate in Mokpo illegally through a different name that I will donate all of those assets, has not changed.”

Sohn had vehemently denied the allegations after TV network SBS broke the scandal in January.

SBS reported that Sohn and her family bought dozens of buildings in Mokpo’s old city center after learning the area would be designated as a “modern history and culture site” by the Cultural Heritage Administration, which boosted property values in the area.

“All my life, I have never used influence on others for my own gain,” Sohn said in a press conference she hosted in Mokpo just a few days after the SBS report was released.

The press conference was held inside dilapidated building set to be torn down and replaced with an antique museum, which was bought by a foundation chaired by her husband.

In the press conference, Sohn said the museum would be donated to the public. She also said she would donate all her pieces of antique furniture inlaid with mother of pearl dating from the 17th centuries, worth 10 billion won according to her, to the city and provincial governments of South Jeolla to prove that she doesn’t want to make a profit.

In the press conference, Sohn also mentioned her friendship with first lady Kim Jung-sook, saying, “A lawmaker who has been best friends with the first lady for 50 years has nothing to fear.”

Sohn left the DP soon after the scandal broke in January.