Japan still No. 1 for foreign beers, but others rising

Japan still No. 1 for foreign beers, but others rising 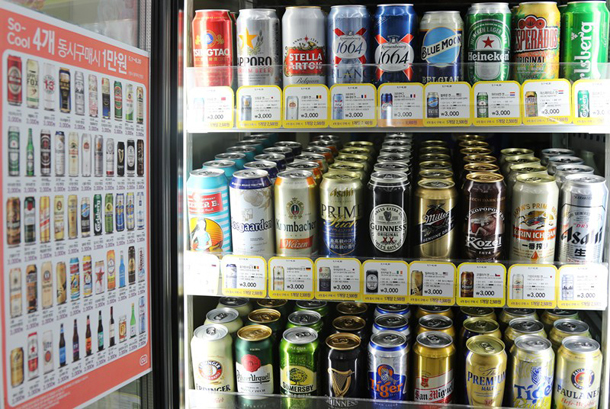 The popularity of imported beers continues, but taste and demand are diversifying.

Although beers from Japan, like Asahi, continue to be the most popular imported beers in Korea, their presence has dwindled by more than a half due to a wider range of offerings, according to the CU convenience store chain on Thursday.

The market share of Chinese beers gained momentum in recent years, backed by the growing demand for Chinese foods like malatang (spicy broth with meat and vegetable) and guobaorou (deep-fried pork cutlet).

Sales of Japanese beers at CU in 2014 accounted for 38.1 percent of the total imported beer sales, but the proportion dipped to 27.5 percent this year from January through May. Sales of Dutch beers, like Heineken, also dwindled, from 10.3 percent in 2014 to 9.8 percent this year, while those from the United States inched down to 6.8 percent from 10.2 percent over the same period.

Sales proportion of Chinese beers, like Tsingtao, more than doubled, from 4.9 percent in 2014 to 10.2 percent this year.

“Since selling four cans of imported beers at 10,000 won ($8.90) has settled as a near constant promotion at convenience stores, sales of the imported beers have almost doubled over five years,” said a spokesperson from BGF Retail, which operates CU. “We plan to strengthen our marketing [of imported beers] following the steady rise in their demand from the cultural trend of drinking alone at home.”

While Japanese beer sales at GS25 were 40.2 percent of total foreign beer sales in 2015, that number has fallen to 28.4 percent. The popularity of Chinese beers was especially notable as the figure jumped from 1.3 percent in 2015 to 10.5 percent this year.

Sales of Belgian beers, like Hoegaarden, also increased, from 7.2 percent in 2015 to 13.9 percent this year, largely backed by the increased demand for citrus beers among drinkers in 20s and 30s.

“Although the sales proportion of Japanese beers may have dwindled, their sales volume continues to be the highest,” said a spokesperson from GS Retail. “The reduced portion reflects the fact that a more diverse range of foreign beers are being sold at domestic convenience stores.”