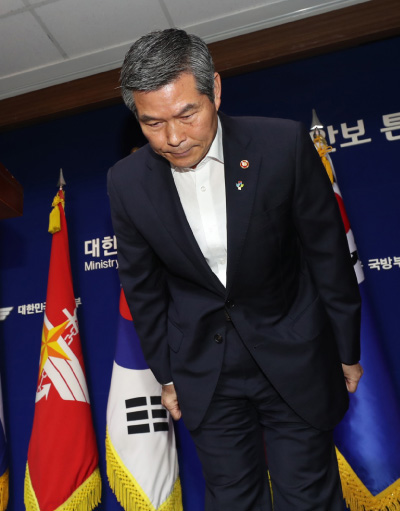 The Minister of National Defense Jeong Kyeong-doo on Thursday issued an apology for the military’s failure to detect a North Korean boat that crossed the border last week, as well as the authorities’ subsequent lies to cover up the incident.

“The military is taking the situation seriously, and I offer a deep apology to the people,” Jeong said in a press conference. “Taking this incident as an opportunity, we will thoroughly inspect the vigilance operations of the military and sternly punish those responsible.”

Jeong also vowed to be transparent with the public.

“We will offer detailed explanations to the people about various suspicions raised after the incident in order to make sure there is no lingering doubt,” he said. “If there were any lies or cover-up regarding this incident, we will conduct a thorough investigation and hand down stern countermeasures based on laws and regulations.”

The apology was issued after the military faced fierce public criticism for having failed to detect the border crossing of a North Korean wooden boat last week and subsequently lying about its botched operation to stop the boat from entering South Korea.

The military said in its initial announcement that the boat, carrying four people, was discovered while adrift due to engine failure near Samcheok Harbor, Gangwon, on Saturday. It was later revealed that the boat actually crossed the eastern Northern Limit Line, the inter-Korean maritime border, on June 12 and freely sailed in South Korean territorial waters for 58 hours until it entered the harbor on Saturday.

It was also revealed that one of the crew had actually made it to land and asked a passerby at the harbor to borrow a mobile phone. The government became aware of the arrival of the North Koreans only after the resident called the police. After being questioned, two of the North Koreans were sent back to the North through Panmunjom on Tuesday. The other two defected to the South.

During the press conference, Jeong said the military will improve its readiness and tighten discipline to prevent similar incidents from occurring. He left without taking any questions, and his apology took just 90 seconds.

Earlier in the morning, Prime Minister Lee Nak-yon issued the first apology of the government.

“What has been revealed so far is enough to trouble the people,” Lee said. “I deeply apologize for this.”

“The joint investigation team must thoroughly probe what had happened, the military’s readiness and other countermeasures,” Lee said. “The investigation outcome will be transparently released to the people and those responsible will be sternly held accountable. We will also quickly upgrade surveillance equipment and soldiers’ readiness.”

The Ministry of National Defense on Thursday formed the inspection team, which includes military experts and investigators, and dispatched it to the area. The Joint Chiefs of Staff, 23th Division of the Army and 1st Fleet of the Navy will be investigated for about a week. The investigation team will probe the soldiers’ failed operation to detect the infiltration. It will also investigate if the reporting of the incident was made properly through the chain of command.

Despite the apology, the conservative opposition parties demanded Defense Minister Jeong to step down.

Rep. Oh Shin-hwan, floor leader of the Bareunmirae Party, also pressed President Moon Jae-in to fire Jeong and punish everyone who participated in the cover-up attempts.

Oh said Moon must remember what he had done when a North Korean soldier managed to cross the demilitarized zone and knocked on the door of a South Korean barrack at the border in October 2012 in order to defect. “Moon, a presidential candidate at the time, said the Lee Myung-bak administration was incompetent and could not protect the country,” Oh said.

Both parties also said they would submit a resolution on Jeong’s dismissal if he refused to resign. LKP Chairman Hwang Kyo-ahn said the Sept. 18, 2018, inter-Korean military agreement, signed by ranking military officials during the Pyongyang summit between Moon and North Korean leader Kim Jong-un, must be abolished. It was intended to prevent military confrontation, but Hwang said it weakened the South’s vigilance against the North.