Pak Un Jong, chairperson of the Anti-Corruption and Civil Rights Commission, addresses the audience at the 2019 Anti-Corruption Forum hosted by the Korea JoongAng Daily and the UN Global Compact Network Korea at Lotte Hotel Seoul in central Seoul on Thursday. [PARK SANG-MOON]

The Korean government’s fight against corruption is being noticed around the world, including in Zambia, New Zealand, Switzerland and Egypt, their ambassadors told the Korea JoongAng Daily on Thursday.

“It seems to us in New Zealand that Korea has made tremendous progress in recent times and we saw some of that evidence today,” said Philip Turner, ambassador of New Zealand to Korea, at the 2019 Anti-Corruption Forum in central Seoul.

The New Zealand ambassador mentioned some of the changes in the people’s experience with corruption in the country that were announced at the forum, hosted by the Korea JoongAng Daily and UN Global Compact Network Korea at Lotte Hotel Seoul.

“Every year, the Anti-Corruption and Civil Rights Commission of Korea [ACRC] conducts a survey of citizens who are related to or contracted with a public agency,” said Pak Un Jong, chairperson of the ACRC. “The survey asks questions mainly about whether the respondents provided money or entertainment to public officials, whether they think the public agency maintained fairness or whether they trust in the public agency’s work. On average, only 1 to 2 percent of respondents answered that they gave money or entertainment to public officials. That number has been steadily declining, and it hit a record low of 0.7 percent last year.”

Korea passed the Improper Solicitation and Graft Act, also known as the Kim Young-ran law, in 2016. According to the law, a public official, whose definition in the law also includes teachers at private schools and journalists, will face criminal punishment for receiving money or favors deemed expensive. A gift worth more than 1 million won ($860) or accumulated gifts worth more than 3 million won a year are punishable. In addition, entertainment such as expensive meals, rounds of golf or paid vacations are restricted by the law.

“Corruption is a common challenge for all of us and we are equally working hard on factors such as transparency, fair law enforcement, freedom of press, free civil society and a culture that creates trust,” Turner said. “New Zealand takes pride as one of the least corrupt societies in the world, but we’re not perfect and there’s certainly room for improvement.” 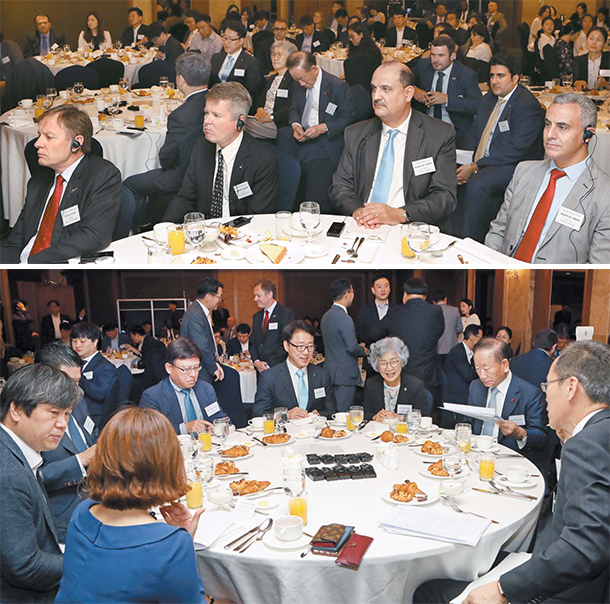 Above: Ambassador of New Zealand Philip Turner, the Korea JoongAng Daily Chief Editor Anthony Spaeth, Ambassador of Egypt Hazem Fahmy, Ambassador of Tunisia Nabih El Abed, listen to the speakers and panelists at the 2019 Anti-Corruption Forum hosted by the Korea JoongAng Daily and United Nations Global Compact Network Korea at Lotte Hotel Seoul in central Seoul on Thursday. The forum was joined by Anti-Corruption and Civil Rights Commission, members of the diplomatic community, corporate executives and managers in compliance divisions and legal experts. Below: Participants in the forum network and enjoy breakfast together at the start of the forum, which was hosted to address how transparency and integrity can be embedded into business practices in Korea, especially as the country prepares to host the International Anti-Corruption Conference in 2020. [PARK SANG-MOON]

New Zealand passed in 1982 an act that requires governments to justify withholding information, and has continued to encourage open government.

“In January of 2019, the government announced that all Cabinet papers are to be publicly disclosed within 30 days, unless there’s a really good reason not to,” Turner said. “We are, at the moment, also updating legislation to protect whistle-blowers.”

New Zealand ranked No. 1 on the Corruption Perceptions Index (CPI) of Transparency International in 2017, followed closely by Denmark, Finland, Norway and Switzerland. Korea ranked 51st on the list that year and 45th in 2018.

“Fighting corruption is a priority in all countries, and it was very encouraging to see the direction Korea is taking to fight corruption,” said Linus von Castelmur, ambassador of Switzerland to Korea. “Appropriate laws are a prerequisite, but in the end it is the right practice that counts. And for this, we believe in Switzerland that education, transparency and empowerment of the citizens is key.”

Ambassador von Castelmur emphasized the importance of creating a culture in workplaces where government officials and employees are encouraged to speak up about actions they perceive to have been influenced by corrupt intentions.

“It has less to do with laws and regulation as much as it has to do with practice,” von Castelmur said. “Having a kind of corporate or administrative culture where employees and officials can question, is this the right action to take, in, per se, a casual staff meeting, and having that open discussion culture would effectively help a society fight corruption.”

The forum on Thursday was attended by diplomats, corporate executives and managers in compliance divisions, members of the ACRC, Fair Player Club and Korea In-House Counsel Association as well as Transparency International Korea and the American Chamber of Commerce in Korea.

“Having this many people in the compliance division in one place in itself was meaningful,” said Lee Joon-gil, senior adviser of Jipyong LLC, a law firm based in western Seoul. “Companies still consider compliance as one of the necessary procedures to make sure their work is legal, but it should be more than that - it should be a culture, a mindset, in all branches in the corporate sector.”

While experiences of corruption may have decreased in Korea, according to the ACRC, the perception of corruption in the country still remains high.

“Though fewer and fewer people are perceiving the nation to be corrupt, still as many as 50 percent of Koreans think the nation is not transparent and fair,” Pak said.

“I found the gap between the actual corruption experience and the corruption perception very interesting,” said Wylbur Chisiya Simuusa, ambassador of Zambia to Korea. “Management of that gap is key; and the better we manage that gap, the more successful we are.”

Zambia enacted its Anti-Corruption Act in 2012.

“The act brought into being the Anti-Corruption Commission [ACC] that has the power to prosecute and even secure arrests,” Simuusa said. “Our sitting minister has been arrested and is currently being investigated by the ACC. … Whistle-blowers are being encouraged, and that is working. The other thing we are trying to do is work with NGOs to promote transparency.

“I congratulate Korea on improving its CPI,” he added. “I’ve picked up quite a bit of what is happening here to suggest back home, and hopefully I will see it will translate to the improving of the CPI in Zambia.”

“Egypt also is putting anticorruption fight as one of its priorities, and last week we hosted the first African Anti-Corruption Forum where 54 countries participated,” said Hazem Fahmy, ambassador of Egypt to Korea. “Any government that has a good vision for the future of the people should recognize the priority in fighting corruption. We hope to catch up soon to what Korea has achieved in this regard.”

The role of media in reporting on corruption was also emphasized at the forum.

“The anti-graft act came into effect in late 2016, and it caught the attention of the entire nation at the time,” said Chung Kyo-hwa, vice chair of the Compliance Committee of Korea In-house Counsel Association. “This was partly because the scope of public officials was expanded to include journalists in the act, and there was a lot of media coverage - they played a role in raising awareness of the law among the public.”

Some debated if too much coverage would lead to a skewed perception of corruption in the country. Among former presidents, Park Geun-hye was impeached over corruption and sentenced in August 2018 to 25 years in prison, Lee Myung-bak was sentenced to 15 years for bribery and embezzlement in October 2018 and Roh Moo-hyun was investigated in 2009 for bribery before he committed suicide. After Lee was jailed, media reports emphasized the recurrent trend in Korea of jailing of ex-presidents.

“I think the world perceives the level of corruption in Korea to be high, partly because their look into the country is limited and can be influenced by media reports,” said Park Kyeong-ho, a partner at Lee & Ko, a law firm based in Jung District, central Seoul, and former vice chairperson of the ACRC. “The media must report on corruption in the country, but perhaps too much reporting on corruption all the time can skew the way the world perceives the level of corruption here.”