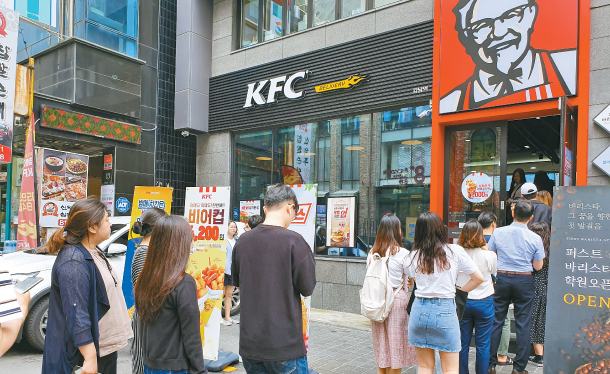 At 9: 40 a.m. on Wednesday, the KFC in Gangnam Station, southern Seoul, was full of people waiting to get their hands on the snack. When the store started serving food 20 minutes later, people rushed to line up at the self-service kiosk stands.

They were rushing to get their hands on the limited-edition fried chicken skin, which are sold for 2,800 won ($2.40) for 12 pieces.

The salty and greasy fried skins were first offered at KFC restaurants in Indonesia. 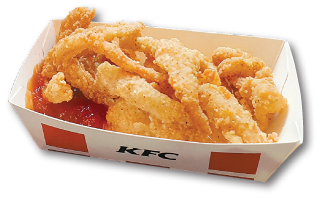 Users of DC Inside, an internet forum, started uploading posts that they would like to try the skins, and KFC responded.

The chicken skins immediately were a hit at the Gangnam branch.

After just seven minutes of service, a store employee shouted, “it will take 30 minutes or more when ordering.”

Despite this, customers kept on waiting.

“I think it’s worth waiting,” said a 23-year-old college student who came alone. “I have to wait for [only] 30 minutes … I’m glad I came here 15 minutes early before the store opened.”

Around lunchtime, the line got even longer. Some started to scalp receipts that had only 15 minutes on the waiting list.

The Noryangjin branch in western Seoul ran out of the skins before lunchtime on Wednesday.

Between all six stores, they sold 5,400 servings on Wednesday.

“The skins on chicken breasts, which were all grown in Korea, had to be peeled off by hand, and as such, we weren’t able to prepare enough,” said a KFC official. “We knew that it would garner some attention, but we didn’t expect it to be at this level.”

Young Koreans are head over heels with unusual flavors.

This is a stark contrast to previous trends that focused on health, such as organically grown ingredients or vegetarian products.

Consumers who seek out bizarre food post delicacies that are extremely salty or sweet, weird looking or made with weird ingredient combinations on their social media accounts.

Most of the people who tried the chicken skins in Indonesia said they were just too salty or greasy, and very few said it was delicious.

Some posted, “I don’t know why people are eating this.”

These foods aren’t necessarily tasty - they’re just unusual. Recent examples include pig’s tail; a “fat” macaron that is the size of a hamburger and filled with various ingredients; and even the extremely sweet Taiwanese brown sugar bubble tea.

Fried chicken franchise and convenience stores, which have trend-sensitive young customers, are getting into the game.

It also has added Ojingeo Jjamppong chicken, which is fried chicken and squid ball marinated with jjamppong (spicy seafood noodles) sauce, to its menu. After posting a picture of the foods on social media, many people add hashtags that reads “never ordering it again.”

Convenience stores are getting even weirder than chicken restaurants. GS25’s Minions choco stick hot chicken snack recently gained wide popularity. The confectionery chocolate stick was aimed at attracting consumers who were curious about the mismatch between chocolate and a spicy chicken flavor.

CU released a biscuit that combined the flavor of whipped cream and watermelon.

There is also rising trend among young people of making odd combinations of foods, like pouring milk onto a potato chip or putting Coca-Cola or milk into instant noodles.

Of Korean food companies, Nongshim is the most upfront with its experiments with bizarre foods.

The company’s most recent hit is a potato chip that combines the flavor of yugaejang (spicy beef soup)-flavored ramyeon. The chips are hard to find at convenience stores, as they are sold out the moment they are shelved.

It also added tuna and mayonnaise to its instant noodle Bibimmyeon.

“Healthy living was a trend that not only covered all generations, but also spread around the world,” said Choi Ji-hye, a researcher of Consumer Trend Center at Seoul National University. “But the bizarre food trend is a type of culture only limited to millennials.”

Some experts are raising concerns, as these strange foods could have negative effects on health.

So called mukbang, or eating broadcast shows, where hosts over-consume food, such as downing a large bowl of brown sugar bubble tea, to attract views are considered dangerous. Many of these foods, such as KFC’s chicken skin, are also very unhealthy, especially when eaten in large quantities.

“The chicken skin itself has a lot of fat and it becomes a high-fat, high-calorie food when frying it on oil,” said Kang Jae-heon, a Kangbuk Samsung Hospital doctor. “A frequent consumption [of such food] not only will lead to obesity but also to diabetes, hyperlipidemia, fatty liver and cardiovascular disorders.”