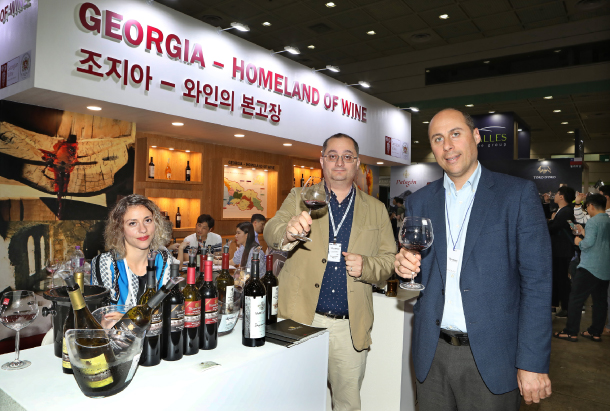 Georgia, which has one of the world’s oldest winemaking traditions, showcased more than 50 types of wine from the country at Seoul International Wines and Spirits Expo at Coex in southern Seoul from Thursday to Saturday.

“There are at least 525 distinct grape varieties to make wine in Georgia and we are introducing here just some of them,” said Otar Berdzenishvili, ambassador of Georgia to Korea. “Of course, there can be more of them available in the Korean market and there should be more, and we are working closely with Korean partners.”

It was the second time the embassy joined the Seoul International Wines and Spirits Expo in Korea.

“The wine is not just a product for us Georgians - it is our lifestyle and identity,” said David Tkemaladze, deputy chairman of the National Wine Agency of Georgia. “We want to share this experience of making wine for more than 8,000 years with the Korean people.”

“Qvevri allows the wine to breathe and get the energy from the earth,” said Ketevan Puturidze, export manager of Teliani Valley, one of 10 companies represented at the Georgian booth at the expo. “The wine made in this traditional way is more tannic because of the extended period of skin contact. The wine goes well with deep-fried food and seafood.”

Berdzenishvili invited more Koreans to try Georgian wine, which is available on the market but has room for growth.

“We are looking to grow the options of Georgian wine available in the market in Korea, and for that we are searching for the right importers to work together,” Berdzenishvili said. “Our hope is that Georgian wine will find a special niche in the market and that its addition will diversify the market tremendously. Korean consumers are looking for organic food products and I can assure that the traditional Georgian winemaking method is one of the most natural ways to make wine.”

Georgian wineries including Tbilvino, Teliani Valley, Dugladze, Chelti, Mildiani and Alaverdi were represented at the expo from Thursday to Saturday, showcasing wine from 10 regions of Georgia, including Kakheti, Imereti and Racha.

The envoy added that Koreans may also find chacha, commonly dubbed the “vine vodka” of Georgia, an attractive drink.

“Chacha is a strong alcoholic drink based on grapes, and I think it could be one of the most popular products among Koreans,” Berdzenishvili said.

The Georgian Embassy also held a wine-tasting event earlier this year at the Somerset Seoul hotel in central Seoul.

“This is one of the most important areas of collaboration between Georgia and Korea,” Berdzenishvili said. “We have a plan to do a big exhibition on the wine of Georgia later in the year.”

The two counties established diplomatic relations in 1992. According to the embassy, about 20 percent of Georgian wine exports go to East Asia.