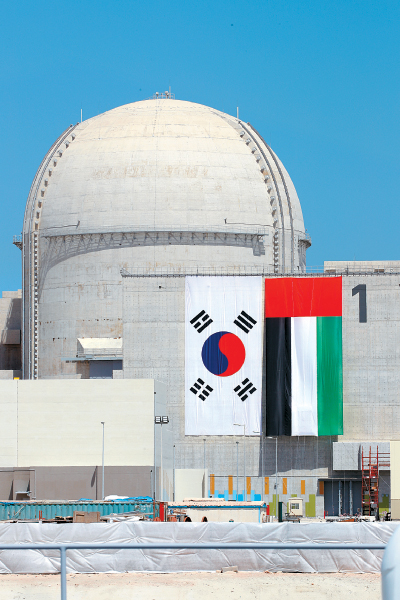 Kepco’s nuclear subsidiary signed an agreement on Sunday with the nuclear operator of the United Arab Emirates (UAE) to provide maintenance at the Barakah nuclear power plant for five years. [YONHAP]

The Ministry of Trade, Industry and Energy said Monday that Korea Hydro & Nuclear Power (KHNP) signed a deal with the UAE’s Nawah Energy Company on Sunday to lead a consortium to become one of the maintenance providers for its Barakah plant.

The value of the deals was not disclosed as they are order-based agreements and the amount of future maintenance work has yet to be finalized, according to KHNP and the UAE nuclear operator.

Nawah, a subsidiary under the joint venture between Emirates Nuclear Energy Corporation (ENEC) and Kepco, operates Barakah, which consists of four reactors and is currently being built by the Korean state-backed electric utility corporation. The plant’s first reactor is expected to start partial operation as early as late this year, according to Nawah.

Kepco and its subsidiaries had been widely expected to become the plant’s sole maintenance provider for 10 years to 15 years, as it led the construction of the plant and was awarded management of its operation for the next 60 years in 2016.

But negotiations for the maintenance contract took a bad turn in 2017 and the UAE considered bids from other companies.

The latest agreement, which allows other companies to take part in maintenance, is a shift from earlier expectations of a sole service provider.

Nawah explained that the change was made to increase its responsibility in the project in accordance with local laws.

“The structure of the contract guarantees, first of all, that Nawah retains the leadership of the maintenance work of the Barakah units,” said Nawah in a statement.

The Korean government also downplayed the change to the agreement.

“Realistically, we have acquired the conditions for our companies to receive maintenance work for the Barakah nuclear power plant,” said Sung Yun-mo, minister of trade, industry and energy.

“Korean companies are likely to have a major role.”

While Nawah said in a statement that the decision to change is unrelated to Korea’s broader energy policy, experts believe that it could have played a role in the UAE’s decision.

The current administration has repeatedly vowed to reduce the country’s reliance on nuclear energy.

“I think that in the UAE’s perspective, with Korea’s announcement of a departure from nuclear energy, there could be a risk to the supply chain,” said Choi Sung-min, a nuclear engineering professor at Kaist. “It would have felt burdened to conduct such a deal [for sole maintenance service].”

Chung Bum-jin, a nuclear engineering professor at Kyung Hee University, said the two countries’ partnership in nuclear energy could be at stake.

“It’s not just about the deal but potentially losing a long term partner,” said Chung. “The UAE has a long term plan to develop nuclear power and Korea’s level of technology in the industry had initially led to a strong partnership.

“Korea could win more contracts in the future globally but without a partner,” he said, “that could become difficult.”