Some 1,500 will be delivered this year and the remaining 500 in the first half of next year. Singapore’s Comfort DelGro operates 60 percent of the taxis in the country. It also has taxi businesses in China, Britain and Vietnam. 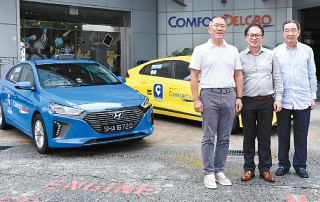 The two companies have been partners since 2007 and Hyundai has sold Sonatas, i40s and i30s to be used as taxis. The partnership has made Hyundai the No. 1 cab supplier in Singapore for the past nine years. Currently, 56 percent of the cabs running on Singapore’s streets, equivalent to 110,000 vehicles, are made by Hyundai.

Comfort DelGro placed orders for hybrid cabs for the first time in 2018, purchasing 1,200. Hyundai received positive feedback from its Singapore customer on the model’s “economic feasibility and stable driving performance,” the company said.

Hyundai hopes that the recent deal will help elevate its image as a leader in the green car industry in Singapore, where the government is trying to increase the number of eco-friendly vehicles on its streets.

“Singapore is an Asian finance and retail hub that attracts more than 15 million tourists a year - offering cabs here will help us strengthen our stance in the eco-friendly taxi market,” Hyundai said in a statement. “We’re confident that this will be a chance for us to promote Hyundai vehicles’ quality and brand to worldwide customers.”

Hyundai’s eco-friendly vehicles are also used by the Singapore-based car-hailing service Grab, starting from January. The model used is Hyundai’s Kona Electric. Grab plans to increase its number of Konas to 200 by the end of this year.

In November, Hyundai Motor and affiliate Kia Motors invested a combined $250 million in Grab, which is now a leading car sharing service provider across Southeast Asia with a valuation of more than $10 billion.