Shares of Hanjin Kal, 30 percent owner of Korean Air Lines, fell for the second day on Monday following an announcement that Delta Air Lines would be taking a significant stake in the company.

The decline came after the U.S. carrier announced it acquired a 4.3 percent of Hanjin Kal and plans to further increase its shareholding to 10 percent. 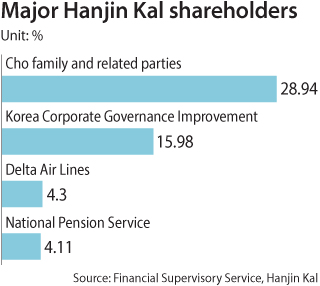 Shares had been bid up previously as Korea Corporate Governance Improvement (KCGI), a local fund, built a significant shareholding in Hanjin Kal and promised to improve the governance and management of the company and its subsidiary.

The family of the late Cho Yang-ho owns 28.94 percent of the Hanjin Kal, though a large portion of that is held by the estate of Cho Yang-ho.

“Hanjin Group’s Cho family has essentially seized the chance to victory,” said Choi Nam-kon, an analyst from Yuanta Securities in a report Monday. “Share prices may fall further to 25,000 won per share level.”

KCGI, 15.98 percent owner of Hanjin Kal and the company’s second-largest shareholder, has been pushing to break the Cho family’s grip on the company and introduce a more balanced governance structure. Before Delta’s share purchase, the fund had enough votes relative to the family to mount effective challenges.

The National Pension Service, the country’s largest institutional investor, holds a 4.1-percent stake in Hanjin Kal, while foreign investors hold 8.27 percent, according to Choi from Yuanta.

The assumption being made by analysts and seemingly by the broader market is that Delta will vote with the Cho family and block KCGI-backed initiatives.

“Now it won’t be effective even if KCGI increased its holdings in Hanjin Kal,” Choi added.

The connection between Delta and the Hanjin Kal is seen as strong. The country’s largest airline was one of four founding members of the SkyTeam alliance along with Delta in 2000. The alliance has 19 member airlines.

The partnership was granted antitrust immunity by the U.S. Department of Transportation. Under the joint venture, the two offer a network connecting more than 290 U.S. and 80 Asian cities.

Cho Won-tae, the only son of Cho Yang-ho, was appointed chairman of the Hanjin Kal board in April. He owns 2.34 percent the company’s stock.

Cho Hyun-ah, the eldest daughter of Cho Yang-ho and infamous for the 2014 nut-range incident, owns 2.31 percent.