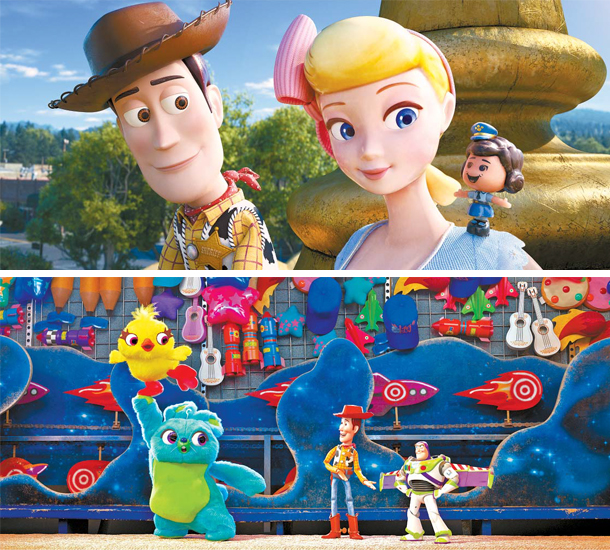 Scenes from “Toy Story 4,” with new additions Forky, Bo Peep, Giggle McDimples, Ducky and Bunny. The latest Pixar film, which some fans were skeptical of, reached the No. 1 spot at both local and North American box offices over the weekend. [WALT DISNEY COMPANY KOREA]

“Aladdin” and “Toy Story 4” spent the weekend battling for the top of the box office, and eventually Woody, Buzz and the gang came out as the victors by a narrow margin on the film’s opening weekend.

The fourth installment of the “Toy Story” series shows Woody and rest of his toy friends with their new owner, Bonnie. Soon, a new toy that Bonnie has made herself, named Forky, becomes her new favorite. Woody, who always looks out for his owners, does his best to take care of Forky for Bonnie’s happiness. Yet while on their journey, Woody runs into a past acquaintance whom he thought he would never meet again.

“Aladdin” missed out on the top spot, although just barely. During its fifth week in theaters, an incredible 950,000 people saw the film at 1,226 screens across the country. But not all the moviegoers were first-time watchers.

Due to the success of the live-action remake, theater chains have rolled out sing-along screenings of the film, and they have proven to be a success among Disney fans.

Local audiences have fallen for the music of “Aladdin” and the stars of the film, Mena Massoud, Naomi Scott and Will Smith, who plays Genie.

Set in the South Jeolla city of Mokpo, the film tells the story of a gangster boss named Jang Sae-chul who suddenly decides to become a better man by campaigning for a seat in the National Assembly, all because of a girl he falls in love with at first sight.

Palme d’Or-winning “Parasite” slid to fourth place in its fourth week in theaters. An estimated 370,000 tickets were sold at 782 screens over the weekend, hinting the excitement over the film’s achievement in the 72nd Cannes Film Festival may be slowing due to competition from the big-name Disney franchises.

Outside of Korea, the film broke records and earned the title of the most successful Korean film in France, selling more than 680,000 tickets on the 18th day of its release. Previously, “Snowpiercer” (2013), also directed by Bong Joon-ho, held the record, having sold 678,000 admissions.

At the North American box office, “Toy Story 4” brought the box office to life with an $118 million opening weekend after a three-week slump of underperforming sequels. But the Pixar film’s below-expectations debut didn’t quell continuing concerns about a rocky summer movie season.

The “Toy Story 4” opening, according to studio estimates on Sunday, ranks as the fourth-highest animated film opening ever, not accounting for inflation. Above it are 2018’s “Incredibles 2” ($182 million), 2016’s “Finding Dory” ($135 million) and 2007’s “Shrek the Third” ($121 million). It’s the year’s third-largest debut, trailing only a pair of other Disney releases: “Avengers: Endgame” and “Captain Marvel.”

The opening for “Toy Story 4” followed a string of disappointing sequels, including “Dark Phoenix,” “Godzilla: King of the Monsters” and “Men in Black: International.” But “Toy Story 4” had something those films didn’t: great reviews. It rates 98 percent fresh on Rotten Tomatoes. Audiences gave it an A CinemaScore.

The sequel also grossed $120 million internationally, including a modest $13.4 million in China, the world’s second-largest film market. It was trounced there by the rerelease of Hayao Miyazaki’s 2001 animated classic “Spirited Away” from Studio Ghibli, the Japan animation studio that has often served as an inspiration to Pixar.

Cathleen Taff, distribution chief for Disney, said the company was thrilled with the opening and praised Pixar’s high standards.

“The Pixar team has always been disciplined about making sure they have a compelling story to tell, and that is especially true when it comes to sequels if you look at their past,” said Taff. “Their process of sort of going through the rigor of making sure that this is a story people want told, the end result speaks for itself.”

In a summer season that’s running 6.5 percent off the pace of last year, according to Comscore, many had positioned “Toy Story 4” as a surefire savior, due in part to the enviable track record of Disney and Pixar. (Disney’s “Aladdin” remake this weekend passed $800 million worldwide.) Instead, the weekend was down 27.2 percent from the same frame last year. Overwhelming the industry’s market leader, Disney was thought immune to any sequel downturn.

But most other studios would love to have a film underperform to $118 million, with an expectation of long-term playability. Outside Sony’s upcoming “Spider-Man: Far From Home,” “Toy Story 4” has no family-friendly competition until Disney’s own “The Lion King” remake opens July 19.

“The numbers being bandied about out there preweekend were certainly much higher than the number that it came in with,” said Paul Dergarabedian, senior media analyst for Comscore. “But if we bring it down to Earth and put some perspective on this, it was still a franchise-high debut. It was a global opening of $238 million.”

But with underwhelming returns for even critically acclaimed comedies like “Booksmart,” little has gone according to plan in Hollywood’s prime time season.