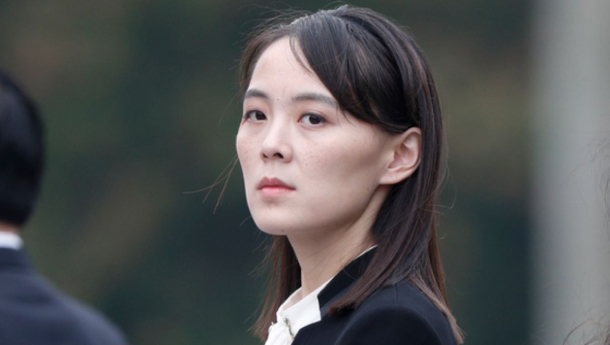 North Korean leader’s younger sister, Kim Yo-jong, has been elevated to the level of a national leader, an upgrade from her previous role as a protocol assistant to the leader, the main South Korean intelligence agency concluded Tuesday in its analysis of Chinese President Xi Jinping’s unprecedented state visit to the North last week.

The National Intelligence Service (NIS) on Tuesday briefed Rep. Lee Hye-hoon of the Bareunmirae Party, chairwoman of the National Assembly’s Intelligence Committee, about Xi’s visit to the North on Thursday and Friday. Following the briefing, Lee met with journalists and shared some of the NIS’s analysis, which dissected in detail Xi’s 27-hour stay in Pyongyang, including his summit with North Korean leader Kim Jong-un.

According to Lee, Kim Yo-jong has been elevated to the level of a national leader.

“If you look at the photos [of last week’s summit], she was standing in the same level of Choe Ryong-hae, president of the Presidium of the Supreme People’s Assembly, and Ri Su-yon, vice chairman of the Workers’ Party,” Lee quoted the NIS as saying. “The NIS believes that Kim’s role has been adjusted and her weight has been increased [within the North’s regime].”

Hyon Song-wol, deputy director of the Propaganda and Agitation Department of the Workers’ Party, appeared to have taken over Kim’s job as a protocol secretary for the North Korean leader, media reports on Xi’s trip to the North have shown.

The NIS also said that the power of Kim Yong-chol, vice chairman of the Central Committee of the Workers’ Party, has been diminished.

“He did attend the welcome ceremony for Xi, but he did not accompany Kim at the summit,” the NIS was quoted as saying. “His status was lowered. It shows that there were changes in the officials’ roles.”

Kim, a former spymaster of the North, was the counterpart of U.S. Secretary of State Mike Pompeo in recent nuclear negotiations between Pyongyang and Washington. Speculation ran high that he was purged after Kim’s second summit with Trump broke down without a deal in Hanoi, Vietnam, in February.

During their summit, Xi and Kim Jong-un must have discussed bilateral economic and military cooperation programs that will sidestep international sanctions on Pyongyang, Lee said, based on the NIS briefing.

“The NIS does not rule out the possibility that they discussed military cooperation plans as well as economic cooperation programs,” Lee said. “Taking into account the fact that economic and military officials accompanied the summit, we believe they discussed [China’s] plans to support the livelihoods of [North Korean people] within the limits allowed by the international community’s sanctions on the North.”

“Because He Lifeng, head of the National Development and Reform Commission, and Commerce Minister Zhong Shan accompanied Xi, we believe that plans to indirectly support the North such as easing restrictions for Chinese tourists’ trips to the North and encouraging cultural exchanges were discussed,” Lee quoted the NIS as saying.

“Food and fertilizer aid must have been discussed,” the NIS was quoted as saying. “It is also possible that they discussed the resumption of high-level military exchanges. It doesn’t mean that they will expand arms trading immediately. It will likely be event participation.”

According to Lee, the NIS believes that Xi made a rare decision to visit the North as massive protests in Hong Kong grew. The NIS also said past Chinese presidents’ trips to the North were labeled as friendly visits, but Xi’s trip to the North was the first state visit.

It was also extraordinary for Xi to travel with the first lady, the NIS noted.

“It was also unprecedented that the Chinese president sent a contributing article to the North Korean media before his trip to be published,” the NIS was quoted as saying.

According to the NIS, Xi received a warm welcome in the North. The North Korean leader Kim and his wife Ri Sol-ju accompanied Xi and his wife about 60 percent of the time during the Chinese guests’ 27-hour stay in the North.