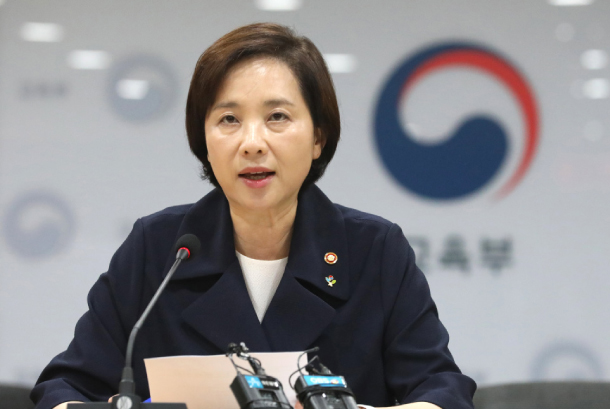 The education minister said she will revoke the status of the schools, as they cause excessive competition to get higher rankings among schools and create an educational environment that only focuses on college entrance exams, at a press conference in a restaurant near the government complex in Sejong on Monday night.

“The competition to get into universities has intensified [to the point where it] starts with children in elementary schools, which resulted in distorting the educational system,” Yoo added.

Yoo said that the autonomous private high schools will be assessed rationally and their elimination would be carried out in a number of stages. She said the Education Ministry shutting down autonomous high schools en masse by revising the enforcement decree is not the answer.

“There has been political pressure to revoke Sangsan High School’s appointment as an autonomous private high school, which I think is the same as prompting a superintendent to commit a crime,” said Kim in a press conference on Monday around noon. “The assessment on autonomous private high schools was conducted by an independent assessment team, with strict procedures leading to its decision.”

Kim spoke publicly for the first time on the matter since its announcement last week by the educational office when the plan to revoke Sangsan’s status sparked controversy. The office said Sangsan scored 79.61 out of 100, just a hair below the passing score of 80, in its assessment of whether the school should be able to keep its status as an autonomous private high school.

The Education Ministry’s guideline on the assessment requires that high schools receive a score of 70 to maintain their autonomous status.

However, the North Jeolla Education Office added an additional 10 points to this guideline, making it harder for schools in the province to pass.

Around 1,000 parents of students who attend autonomous private high schools staged a rally in front of the Seoul Metropolitan Office of Education in central Seoul on Thursday to express their opposition to the government’s plan to change the elite private autonomous high schools into regular schools.

The North Jeolla Education Office’s decision has yet to be confirmed by the education minister, which would be the final step in the revocation process. The decision is part of a larger movement by the progressive Moon Jae-in administration to scrap autonomous private high schools across the nation. It hopes to achieve what it describes as equality for all students in education and competition.

Some members of the ruling Democratic Party (DP) continue to support revoking the school’s autonomous status. The recent scandal was discussed in a meeting held by the DP at the National Assembly on Monday.

“Autonomous private high schools were implemented to provide autonomous and diverse education,” said Kim Hae-young, a DP supreme council member. “It is not a school to draft students with good grades and focus only on college entrance exams.

“In a situation where diversity and efficiency for education cannot be ignored, shutting down model autonomous private high schools like Sangsan High School is wrong,” said Sohn.