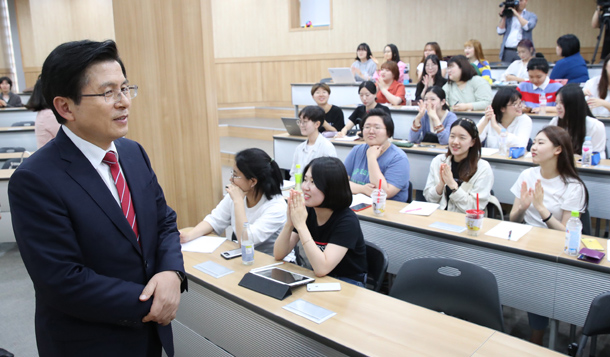 Hwang Kyo-ahn, chairman of the Liberty Korea Party, gives a lecture at a university in Seoul last Thursday. [YONHAP]

KIM SEUNG-HYUN
The author is a deputy political news editor of the JoongAng Ilbo.

“The problems of the younger generation in Korea are not easily resolved. So I think the young Koreans lose confidence. I think they can dream of a better future if they recover confidence. I hope Korea will become a country where young people have confidence.”

Opposition Liberty Korea Party (LKP) Chairman Hwang Kyo-ahn wrote this in his book, “Setting out a long journey because it is deep into the night,” published earlier this month. The book was published in time for the 100th day of his party leadership. He also wrote, “I did not lose attention and attitude to listen when I met with college students, job seekers, those preparing for civil service exams, young people, school parents and mothers, even though I may have some trouble understanding them as an old male politician.”

However, his attention is about to come to nothing. His approach to the young people enraged them. Why did he mention how his son successfully got a job at a top company to illustrate the significance of confidence? He said his son could find a job thanks to his career as chief editor of the English newspaper at Yonsei University despite his mediocre academic performance. There is no other way to explain his remarks other than lacking empathy. Young people call it “zero empathy.”

Hwang was determined when he met young people at a lecture that day. He repeatedly said he thinks he is an “outdated stubborn man.” He said, “People say the LKP is backward,” and asked “Do I look outdated?” He also said, “It was necessary to show my true self to those who think I am backward.” Now, people will remember his zero empathy.

Hwang plans to make university chapters around the country and wants to increase contact with young people. I hope he does not lose confidence in young people. Empathy can be enhanced if it is not genetically engrained. It is possible if he knows he has zero empathy at the moment. I hope Korea will be a country where politicians can recover confidence.