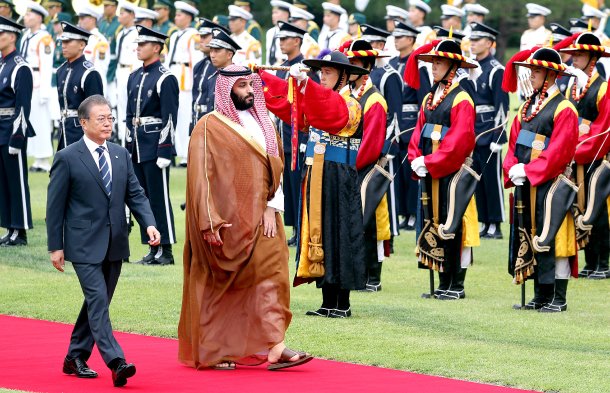 President Moon Jae-in held a summit Wednesday with Mohammed bin Salman, the crown prince of Saudi Arabia and de facto ruler of the oil-rich kingdom, and agreed to diversify and expand bilateral cooperation.

The governments and companies from the two countries signed economic agreements worth over $8 billion.

The summit took place at the Blue House in the afternoon as a part of the crown prince’s two-day trip to Korea. During the summit, the two leaders discussed moving beyond traditional cooperation in energy and infrastructure industries, according to a joint press release.

Moon expressed support for Saudi’s Vision 2030, an economic and social reform initiative pushed by the crown prince. The two leaders agreed to strengthen a bilateral strategic partnership to promote the program, according to the statement.

Saudi Vision 2030, announced in April 2016 by the crown prince, is supposed to reduce the country’s dependence on oil while diversifying its economy. Korea is one of Saudi Arabia’s eight strategic partners in the project, along with the United States, Japan and China.

Saudi Arabia is Korea’s largest supplier of crude oil. It is also Korea’s most important economic partner in the Middle East.

“Our government’s innovative policy and the Saudi government’s Vision 2030 share many common factors, and I believe there is much room for further bilateral cooperation,” Moon said in opening remarks at the summit. “I hope the two countries will advance strategic cooperation for the success of Saudi’s Vision 2030.”

According to the press release, Moon and the crown prince agreed to diversify and expand bilateral cooperation in new industries, such as eco-friendly automobiles, information and communication technology (ICT), and 5G. The two governments signed 10 related memorandums of understanding (MOU) after the summit.

In the long term, the country plans to build more nuclear plants to provide 15 percent of its power. The project is estimated to cost $100 billion.

“Both sides reiterated continuous collaboration in the field of peaceful uses of nuclear energy,” the joint press release said. “The Kingdom of Saudi Arabia welcomed the continued Korean participation in the bidding of the first commercial nuclear power plants project in Saudi Arabia. The two sides highlighted the importance of continuing cooperation in technology, safety and human capacity-building in the nuclear research and development and regulatory areas.”

Last year, Kepco was shortlisted to bid for the project along with rivals from the United States, France, Russia and China. The lucrative deal is the second opportunity for Korea to enter the Middle East market, following its project in the United Arab Emirates in 2009.

At the summit, the crown prince expressed hopes for stronger cooperation with Korea. “I believe the two countries are preparing multiple MOUs and cooperation projects to coincide with my visit,” he said in his opening remarks. “Cooperation in various fields including energy, automobiles, tourism and health are prepared. And there are other prominent areas that we have not explored. I believe the two countries can further strengthen trade and investments.”

He said the people of the two countries will be able to enjoy more prosperous and stable lives through bilateral defense and economic cooperation.

According to the Blue House, the crown prince told Moon that he expects Korean companies’ participation in various economic projects. “Korean companies’ excellent technology and expertise will contribute to advance bilateral ties,” he was quoted as saying.

The Blue House also said Moon explained his North Korea policy and the latest developments on the Korean Peninsula to the crown prince. The crown prince reaffirmed Saudi Arabia’s support for Seoul’s efforts to establish peace.

It was the first visit by the crown prince, who holds other powerful titles such as deputy prime minister, defense minister and chairman of the Council for Economic and Development Affairs. The visit was also the first by an heir to the throne of the world’s largest oil exporter since 1998.

Korea extended an extraordinary welcome to the Saudi leader. Prime Minister Lee Nak-yon received him at the Seoul Airport in Seongnam.

Despite his ambitious economic and social reform programs, controversy surrounds the 33-year-old crown prince, named heir to the throne in June 2017 by his father, King Salman. Last week, United Nations human rights experts said he should be investigated over the killing of dissident journalist Jamal Khashoggi.