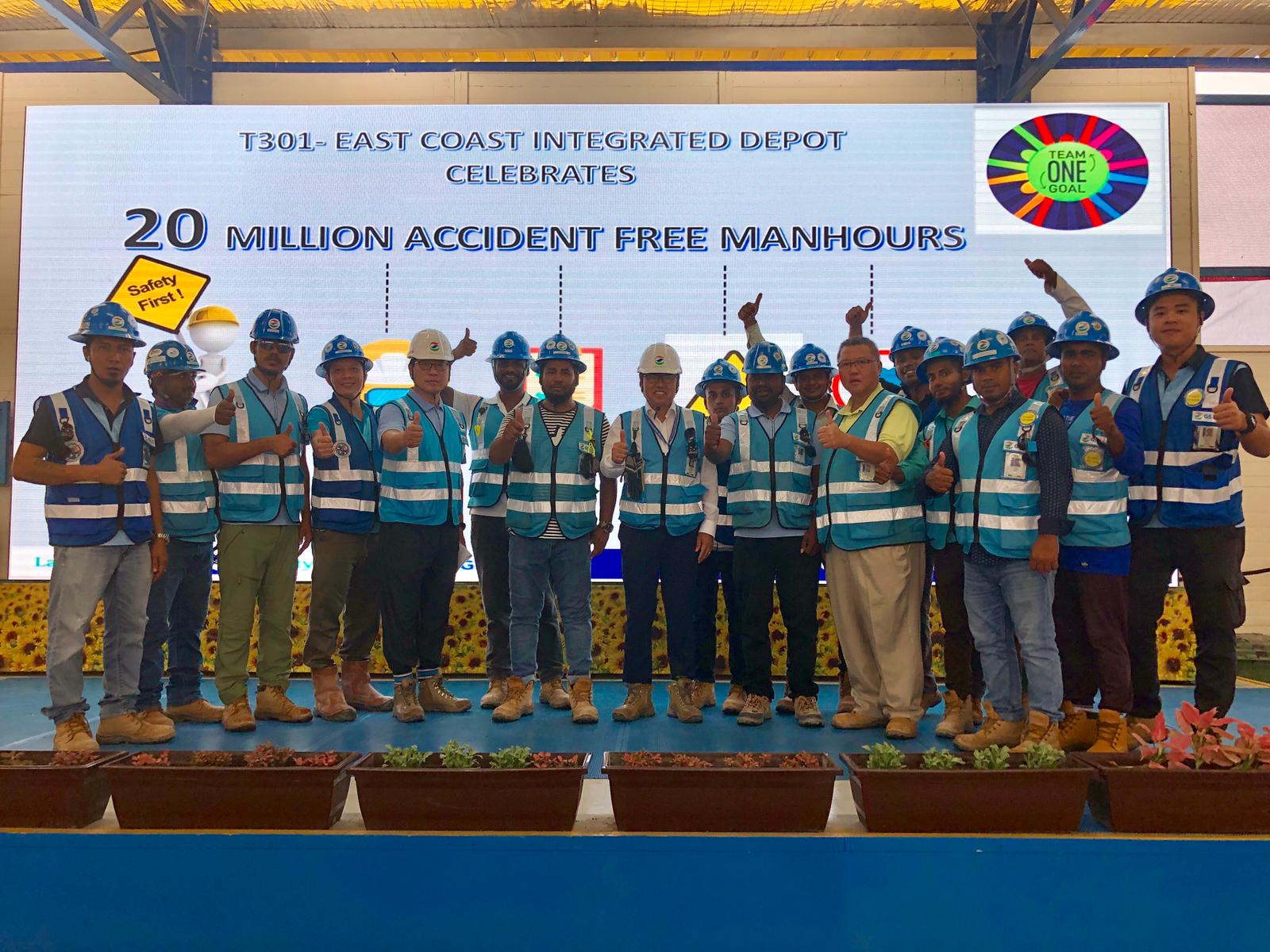 GS E&C and its partners celebrate 20 million accident-free man hours of the T301 project, which is the biggest construction project ever requested by Singapore’s Land Transportation Authority. [GS ENGINEERING AND CONSTRUCTION]

The company’s achievement of 20 million safe man hours is very significant, as it is the first time in Singapore’s Land Transportation Authority (LTA)’s 50 years of construction history.

GS E&C winning the contract to build T301 in 2016 received a lot of attention, because it was the world’s first and largest building-type vehicle base. It was a construction site that President Moon Jae-in visited last year, which was introduced as the best example of mutual growth among large corporations and partner companies.

T301 project is a project to construct the vehicle base of three Singapore subway lines (Downtown Line, Thompson East Coast Line and East West Line) near Changi Airport in southeastern Singapore. It is the biggest construction project ever requested by LTA, with a total construction cost of 2 billion Singapore dollars ($1.48 billion).

T301 accommodates a total of 985 subway cars in a three-story vehicle base and a total of 812 buses in four stories vehicle base. Its total construction period is 95 months, and it will be completed in February 2024.

The initial works including earthwork, slurry wall and soft foundation was completed in T301 site with vast area of 48ha (about 150,000 pyeong, or 496,000 square meters) and multi-structure construction is currently underway.

“We have adapted Incident and Injury-Free Program (IIF), an advanced safe management technique program that both workers and ordering organizations participate to make project successful,” said Kim Deok-bae, director of T301 construction of GS E&C. “We are working hard to establish an active safety-oriented culture.”

Meanwhile, GS E&C’s construction performance based on thorough safety management has been recognized the highest levels in Singapore.

On March 29, the C937 site, which was constructed by GS E&C, won the Best Managed Rail and Road Infrastructure-Project Partner category in the Land Transport Excellence Award 2019, which celebrates the best in industry partners and individuals who played crucial roles in land transport system in Singapore.

“T301 project, the biggest project of the Singapore subway, was the first in the history of LTA construction to reach 20 million accident-free man hours, giving it an opportunity to be recognized for its excellent safety management capabilities by the Singapore government,” said Oh Jin-man, GS E&C division general manager of Singapore. “We will do our best to accomplish successful and accident-free construction, so that we can meet the expectations of the Singapore government.”