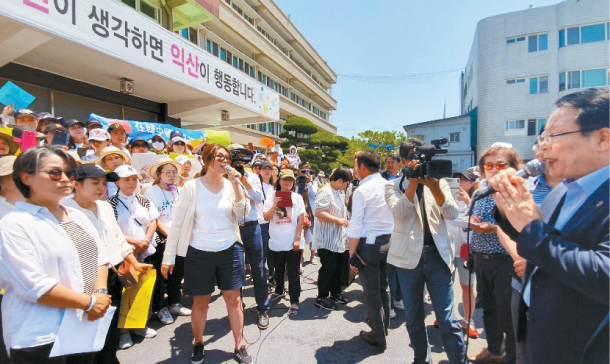 The mayor of a rural city in North Jeolla is facing outcry from local civic groups and multiethnic families for calling interracial children “hybrid” during a public event last month.

Iksan Mayor Jung Hun-yul attempted to douse the subsequent backlash by suggesting to media he only chose that term because he couldn’t use a more insulting moniker, causing even more ire.

The Women Migrants Human Rights Center of Korea, a nongovernmental organization representing female immigrants in the country, said in a press release Wednesday that it was planning to submit a petition against Jung along with other groups to the National Human Rights Commission of Korea this morning and hold a press conference denouncing his remarks in the afternoon near the National Assembly in Yeouido, western Seoul. After the press conference, the groups will visit the headquarters of the minor left-wing Party for Democracy and Peace, to which Jung is affiliated, in order to “protest” his comments, the press release continued.

The civic groups have called on Jung to resign from his mayoral post.

Jung’s inflammatory remarks were made on May 11 at Wonkwang University in Iksan, 112 miles south of Seoul, when he was invited to give a congratulatory message to a crowd of some 600 people, mostly multiethnic families, who were gathered for a sports festival.

“Biologically and scientifically speaking,” said Jung, “there’s something called hybrid vigor. But if society fails in educating these smart and pretty children, they could become a problem, like the Paris riots.”

Hybrid vigor, also known as heterosis or outbreeding enhancement, refers to the improved function in biological quality in hybrid offspring, often used to describe plant varieties that exhibit greater biomass than either parent.

Jung was criticized even more after the event when he told local media that he used the expression “japjong,” hybrid, during the May 11 event because he couldn’t publicly use the word “twigi,” which is considered a more vulgar Korean term for mixed-raced children. Jung said he intended to praise multiethnic children, and denied any intent to inflict harm.

The media spotlight on Jung’s comments peaked last week when several civic groups issued press releases excoriating the Iksan mayor and held a press conference in front of Iksan City Hall on Tuesday morning to urge Jung to resign. Nearly 150 female immigrants from the Philippines, Mongolia and China called for him to step down at the press conference.

On June 20, Jung released a formal apology to the media, saying he made “the wrong choice of words” and that he meant to say that members of society should join hands in raising smart multiethnic children.

Jung appeared at the Tuesday press conference, but refused to immediately resign.

“After you see us [Iksan city government officials] sincerely introducing policies [for multiethnic families] and still think it’s not enough, then I will accept any criticism,” he said.

Jung said Thursday he and his entire staff at the Iksan city government office would receive “human rights education.”