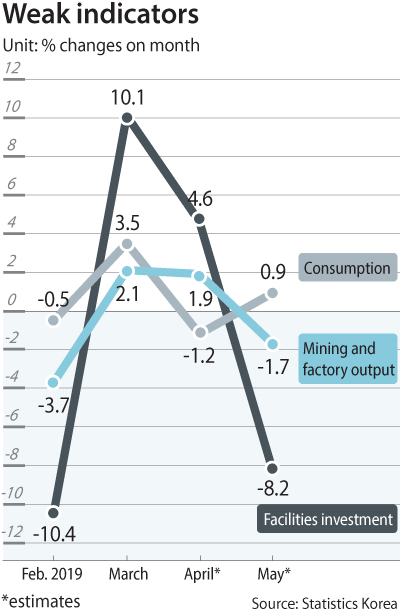 Statistics Korea announced Friday in a monthly industrial activity report that indicators for industrial, or mining and factory, output and facilities investment turned to declines in May from the previous month, after two consecutive months of rises.

Of the three major indicators, only the consumption index rose last month, increasing 0.9 percent from the previous month.

The report highlighted worrying signs in the manufacturing sector as its output fell 1.5 percent on month and its inventory-to-sales ratio was at 118.5 percent, the highest since September 1998 when the country was dealing with the Asian financial crisis.

Inventory for the automobile sector last month rose 18.2 percent on year and for semiconductors by 15.8 percent. Inventory for chemical products also increased 10.7 percent from the previous year.

The statistics agency’s composite leading indicator, which predicts the future direction of the economy, fell 0.2 points to 98.1 last month from April. A fall in the indicator suggests a worsening economy.

The statistics agency was downbeat about the economic situation.

“Output and investment slowed [in May], however, they could be adjustments following two consecutive rises in March and April,” explained Kim Bo-kyoung, director of the industry statistics division during the announcement of the monthly report.

The report was the latest set of worrying economic data.

Korea’s exports fell 9.4 percent last month from a year earlier and gross domestic product growth for the first quarter slumped to minus 0.4 percent from the previous quarter, the lowest figure since the final quarter of 2008.