Korea seeks to clear its name with new apartments

Korea seeks to clear its name with new apartments 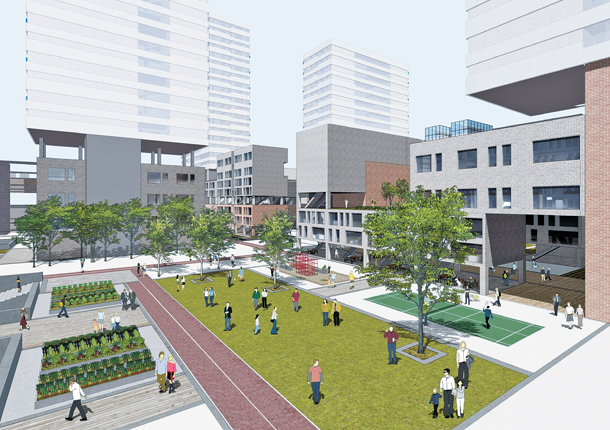 A computer image of the “Five Small Village Community” design, which was the winner for Block 1. It divides the space into five blocks. [UNSANGDONG ARCHITECTS COOPERATION]

Korea’s apartment complexes are famous for their uniformity.

Multiple buildings of identical height and design, packed closely together, has been the standard since high-rise living became popular in the 1980s.

A recent design competition may signal a major change.

With the winners selected on June 21, the plans chosen have been praised by experts as the “most groundbreaking” in five decades of Korean apartment architecture.

The bidding was held by the Seoul Housing & Communities Corporation (SH), a state-owned company in charge of developing housing in the country’s capital city. Competition was fierce because the bid was for the last public housing area in Seoul available for private development: Blocks 1 and 5 of the Godeok-Gangil complex in Gangdong District, eastern Seoul.

Developers in the past would routinely submit the same old designs, citing cost as the dominant driver. This logic didn’t seem to motivate the developers this time around. Depicted in the contest entry are complexes with large gardens, neat alleys and buildings of different shapes and sizes.

SH made its desire clear from the very start. It notified potential bidders that “conventional apartment designs will be dropped.”

Historically, the contests held by SH and Korea Land and Housing Corporation (LH) were won by the low bidder. This time, the plan itself led the process.

Developers were asked to partner with architects to submit designs. The team that came up with the most novel design would win.

The method was unfamiliar in the market, but for construction companies, the bid was too big to miss. Godeok-Gangil Block 1 is 48,434 square meters (521,339 square feet) in size and can accommodate 793 households. Block 5 measures 49,230 square meters and can accommodate 809 households. Each project was valued at almost 1 trillion won ($865 million), according to construction industry sources.

SH disclosed the list of seven judges in advance, which included renowned architects and apartment experts

“Checking the people on the list would have made it clear for the developers that they wouldn’t stand a chance in this competition without a strong, novel design,” said architect Kim In-cheurl, who headed the team of judges.

Developers scrambled to find architects who would bring them the most original blueprints. According to multiple architects who took part in the contest, developers gave them full authority and space to solely focus on design, giving orders to company staff to “never go anywhere near the architects.”

The winner of the competition for Block 1 went to the “Five Small Village Community” plan submitted by the team of Jeil Construction, The UnSangDong Architects Corporation and Yo2 Architects. For Block 5, the “Communal Living Room” design won the bid. It was created by Hyundai Engineering & Construction, Kyeryong Construction, Kunwon Architects Planners Engineers and EMA architects & associates.

Referencing the winning designs, the JoongAng Ilbo examined the way in which Korean apartments may change and why those unspoken rules existed in the past.

Apartments of the same height

Apartment buildings are always the same size for a reason.

The distance between them must be at least 0.8 times the height of the highest building. The intention of this rule is to ensure sunlight reaches apartment residents, but it has long been seen as excessive. It also compels builders to design structures of the same height, as the distance is always a percentage of the height of the tallest building.

The regulation was eased for the Godeok-Gangil complex after it was designated as a special architectural area. The distance criteria weren’t based on the highest building but on the one most southerly.

Under the same conditions in Godeok-Gangil, the distance would have to be 8 meters. This ensures sunlight but also that no area is wasted when buildings of different heights are in the same complex.

Both winning plans mixed low-rise and higher buildings. In Block 1, 37 percent of the complex will be low-rise five-story apartments. At Block 5, the low-rise buildings will have six stories, while the high-rise apartments are as tall as 29 floors.

“As an alternative to the dreary landscape of modern apartments, we designed an apartment complex where yards and streets are along the low-rise buildings and the neighborhood community is alive,” said Lee Eun-kyung, the head of EMA architects & associates whose work was selected for Block 5.

In April last year, JOH & Company, a design and branding company established by Joh Su-Yong, the co-head of Kakao, opened Sounds Urban Resort Hannam, a complex of residences, offices, restaurants and retail spaces in Yongsan District, central Seoul. The site is a model that shows the housing preference of younger people. On a 1,983-square-meter site, five buildings sit on their own. Streets and small yards run between them.

“We’ve only focused on the interior of each apartment house and didn’t put much thought on the outdoor space,” said architect Jang Yoon-gyoo, co-representative of The Unsangdong Architects Cooperation that won the bid for Block 1.

The team that took third place for Block 5 was the “Middle City” plan, developed by Kumho Engineering and Construction and 10 architects, went as far to split one complex into eight neighborhoods.

Both Blocks 1 and 5 are composed of homes that measure either 84 square meters or 101 square meters. However, the floor plans are not standardized by size, meaning various floor plans exist even though they are the same size.

The winning plan for Block 5 has more than 20 floor plan options. Each caters to different stages of the life, like marriage or the birth of a child.

Overseas, experiments to diversify the form of apartments have been ongoing for decades. An apartment complex of high density is still a must in a city, but architects have tried hard to secure diversity and avoid uniformity.

One example is the Nexus World complex, which is in Fukuoka, Japan, and was completed in 1991. The project, which was designed for 250 households, was developed by six architects, including Rem Koolhaas from Netherlands and Steven Holl from United States. The architects were allowed to express their originality and respective style in the apartment buildings.

“I hope that this kind of new attempt would not stop at the Godeok-Gangil complex but spread to other apartment projects so that Korea could clear its name as a country full of uniform apartments,” said architect Kim Sang-gil, who judged the competition.