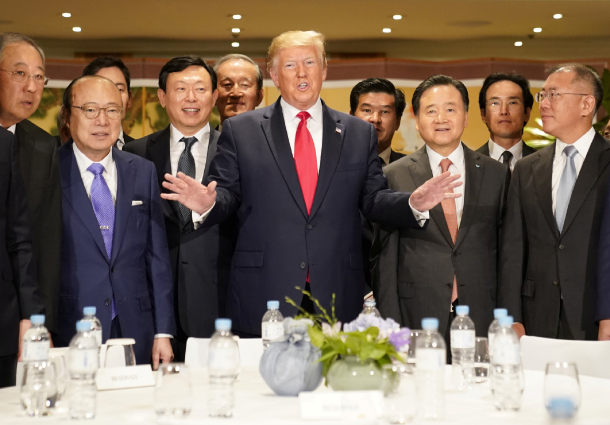 U.S. President Donald Trump attends an event with Korean business leaders at a hotel in Seoul on Sunday. [REUTERS/YONHAP]

U.S. President Donald Trump called for “more balanced trade” with South Korea on Sunday morning as he met with the country’s top business leaders and urged them to expand their investments in the United States.

The meeting took place shortly before Trump’s summit with South Korean President Moon Jae-in at the Blue House. Trump landed in Seoul on Saturday afternoon for a two-day visit following a Group of 20 (G-20) summit in Osaka, Japan.

Trump didn’t make any specific comment on the Chinese telecom giant Huawei during his meeting with the Korean tycoons Sunday, but did mention that trade talks with China were back on track after the G-20 summit, adding he hopes to reach positive results soon.

The Trump administration has been prodding its allies, including Seoul, to stop using Huawei products on security grounds amid growing tensions between itself and Beijing. South Korea fears that siding with the United States could invite economic retaliation from China, similar to the backlash that followed its deployment of the U.S.-led Terminal High Altitude Area Defense (Thaad) antimissile system in 2015.

“South Korea has made great progress in reducing our trade imbalance and unleashing new prosperity for both of our countries,” Trump was quoted by Yonhap News Agency as saying in a speech on Sunday. “We must remain vigilant and ensure that we keep moving forward to a more balanced trade relationship and further reduce the trade deficit.”

The White House chief hailed the revised free trade agreement (FTA) between the allies, which went into effect this year, stressing it will benefit workers in both countries and noting that South Korean companies have gained wider access to American medicine, agricultural products and automobiles.

On investment, Trump said there’s “never been a better time” to invest or do business in the United States, promising a favorable business environment for South Korean companies willing to do expand their business there.

“Bilateral trade and investments are robust,” said Moon, “and economic relations are developing evenly and reciprocally.” Moon continued that the “institutional frame for cooperation” has strengthened between Washington and Seoul after they revised their FTA, adding he and Trump agreed to add momentum on trade relations to “expand and develop” the South Korea-U.S. alliance into a “reciprocal economic alliance.”

Moon also noted that the leaders agreed to seek “harmonious cooperation” between Washington’s “Free and Open Indo-Pacific” strategy and Seoul’s “New Southern Policy” based on the “cooperative principles of openness, inclusiveness and transparency.” Trump said during the press conference that he and Moon discussed various issues including “trade and military,” but didn’t get into specifics.

After the joint press conference, the two leaders traveled to the demilitarized zone, where Moon told Trump at the Observation Post Ouellette that reopening the inter-Korean Kaesong Industrial Complex would help both Koreas’ economies and foster a reconciliatory mood between the nations. How Trump responded was unknown.