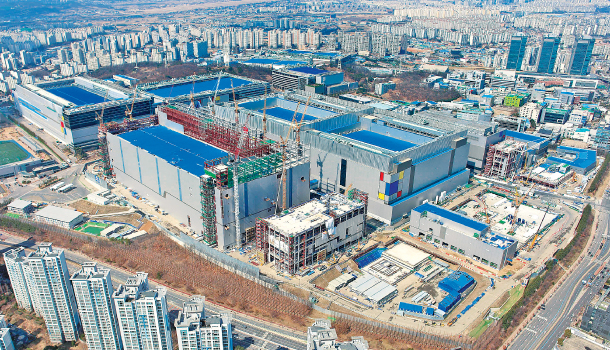 U.S. President Donald Trump was so impressed with a Samsung Electronics manufacturing plant, he could hardly contain himself.

“I happened to fly over a building,” he said, according to a White House release of a conversation between the president and some 20 heads of Korean conglomerates on Sunday at the Grand Hyatt Hotel, where the president stayed. The meeting lasted about 30 minutes.

“It was one of the largest buildings I’ve ever seen; Samsung. Samsung […]And it was a manufacturing building,” he added. “And you know what I’m talking about, right?

Trump arrived on Air Force One at Osan Air Base, a U.S. Air Force Base at Pyeongtaek. He flew from there on Marine One, a helicopter, to Yongsan Garrison.

According to a Samsung official, the company has a semiconductor plant in Hwaseong, slightly north of Osan Air Base.

“The plant has a Samsung logo on it,” said the Samsung official. “I think that’s what President Trump saw.”

The flight path from Osan to Yongsan crosses close to Gyeongbu expressway, where Samsung plant is located.

The plant that Trump probably saw is a new production line that was opened in April and where President Moon Jae-in announced Korea’s “system semiconductor” vision.

It is just 40 kilometers (25 miles) from the U.S. base, and during the weekdays when there is less traffic, it only takes 30 minutes by car to travel from the base to the plant.

Samsung Electronics also has other plants in the area, including DRAM and NAND Flash manufacturing plants at Giheung and Pyeongtaek, which are in the vicinity of the Gyeongbu Expressway.

The Samsung plant wasn’t the only building that impressed the president. He also praised Lotte Tower, which, at 123 stories and 555 meters (1,821 feet), is Korea’s tallest building.

“I asked ‘What is that beautiful building?’ and it was your great tower. Lotte Tower was beautiful. Love the design. It’s pretty hard to miss it, right?” Trump said. “We’re flying in. It wasn’t like, ‘Oh, gee, what’s that?’ But I knew immediately. I knew it from the pictures. But that’s a beautiful tower, and I know it’s done very well. Congratulations. Beautiful job.”

During the meeting, Trump said Korean businessmen were not just South Korean leaders, but “world-renowned leaders.”

“You have done things that are incredible,” Trump said. “I mean, some of the companies.”

Among the Korean conglomerates, he especially thanked Lotte for its recent massive investment.

“Our countries also enjoy a thriving investment relationship,” Trump said. “Since 2017, Korean investment in the United States has expanded by billions and billions of dollars. This includes Lotte Group’s recent investment of $3.1 billion in Louisiana.”

Lotte Group in May held a ceremony in the southern U.S. state to opening its ethane cracker complex at Lake Charles. After the ceremony, Lotte Group Chairman Shin Dong-bin became the first Korean businessmen to be invited to the Oval Office to meet with Trump in person.

On Sunday, Trump delivered a shout-out to Shin.

“And Chairman Shin Dong-bin - I think he’s here,” Trump said. “There you are.

“Your investment of $3.1 billion in Louisiana is going to be a great investment. You know that. So, congratulations.”

He also asked the heads of other Korean chaebol to stand up, adding that they’ve done a wonderful job.

“They’ve made very large investments in our country, including the companies represented in the room; they’ve created more than 50,000 brand new jobs in the United States,” Trump said. “There’s a lot of investment going back into the United States. And we hope that you’ll continue to expand.”