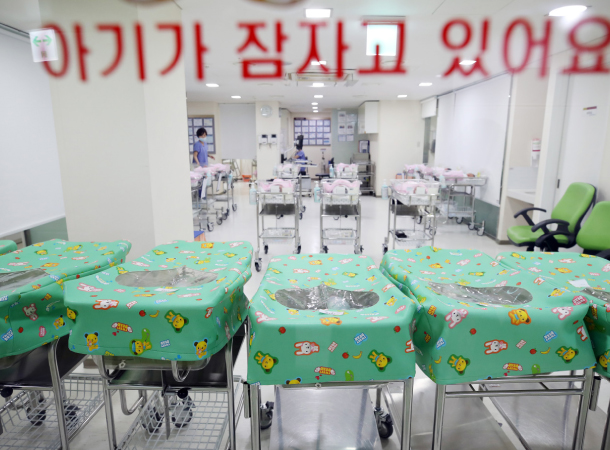 Beds for newborn babies are empty in a general hospital in Seoul on Feb. 10. The population is decreasing faster than expected. [YONHAP]

HA HYEON-OK
The author is a deputy financial team editor of the JoongAng Ilbo.

The two-shift school system in elementary school was common until the early 1980s. Because there were too many school-age children, some lower grades had morning and afternoon classes. Competition was fierce for college entrance and employment, but the overcrowded classrooms showed the power of Korean economy.

He predicted Korea’s demographic cliff would happen in 2018. It is the year that the people born in 1971, the year with the largest number of births, turn 47, the climax of spending. As spending would peak and start to decline, Korea would be likely to experience an economic slump. According to Statistics Korea, Korea’s working age population peaked in 2017 at 37.37 million and started to decline.

Population decline is a negative factor that would bring down employment and growth. Korea has reached the demographic cliff and is standing on the edge. According to Statistics Korea, the population in 10 cities and provinces, including Seoul, is decreasing this year, and the population will be lower nationwide, except for in Sejong, by 2044. Regardless of the administration, 143 trillion won ($123.6 billion) has been spent over 13 years to boost birth rate, but it hasn’t worked. There are so many unfavorable factors.