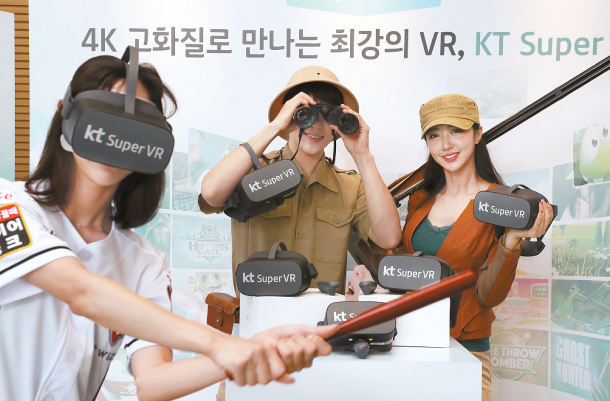 Models pose with the KT Super VR headset during an event held at KT Square in Gwanghwamun, central Seoul, on Monday. [YONHAP]

The headset runs on a system dubbed KT Super VR, a media platform where users can subscribe to different content, including hundreds of 4K options.

KT already has a similar system, GiGA Live TV, which supports VR content and 360-degree films, but the new version has been upgraded to offer 4K content in unison with the newly designed headset. The headset is called the KT Super VR headset.

KT Super VR currently only supports content from KT, but the company plans - without specifying when - to create an open platform on which content from other companies will also be available.

“We have been confident that realistic media will grow to become the next generation media, and that’s why we have been focused on providing such content since 2014,” said Kim Hoon-bae, head of the new media business division at KT, at a press event held in central Seoul on Monday.

“While foreign companies are preoccupied with gaming services, we are working on covering content that can be enjoyed by not just teens and those in their 20s, but people in a broader generation.”

KT Super VR currently offers 450 pieces of 4K content and games in 15 genres that range from sports to shooting. More than 200 pieces of immersive content that provide similar experience to watching a film in an IMAX cinema are also available. The mobile carrier plans to release new content and games every month.

Although the content and device both claim to be 4K, the picture quality was actually significantly worse when tested by reporters that tried out KT Super VR. KT argues that the high quality can mostly be seen on 2-D videos, raising further questions over why viewers would choose to watch that content on a VR headset.

The telecom company introduced its own VR headset because of complaints that existing products that require users to insert their smartphone into the device cause issues like dizziness and discomfort. The KT device has an integrated screen.

“We prepared an integrated headset because detachable headsets cause inconveniences, like concerns about breaking the smartphone screen and being disturbed when one receives calls or texts while watching content,” said Kim. “It took us a while to find a partner with a sufficient level of technology since VR headsets are highly expensive.”

“Since the market is still in the initial phases, we plan to start off the service based on subscriptions,” said a spokesperson from KT. “We believe expanding the market is our top priority, but we are thinking of expanding our profit source to advertisements.”

As part of the effort to diversify its customer base, KT plans to offer numerous VR headsets at different price points.