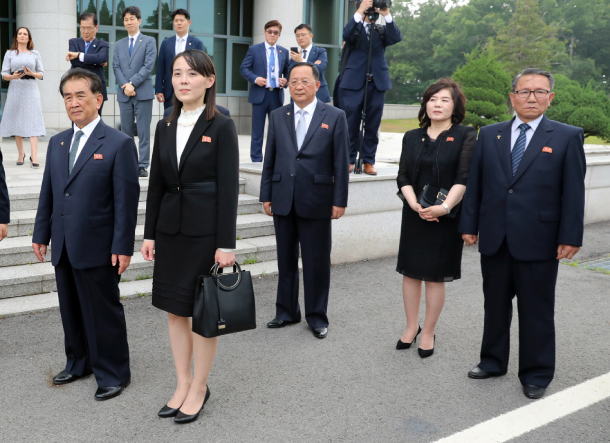 North Korea’s Foreign Ministry will take over from the United Front Department (UFD) as the negotiating partner in denuclearization negotiations with the United States, according to U.S. Secretary of State Mike Pompeo on Sunday.

Speaking to the press at Osan Air Base following Sunday’s snap summit between U.S. President Donald Trump and North Korean leader Kim Jong-un, Pompeo said he and Special Representative for North Korea Policy Stephen Biegun would be leading discussions with Pyongyang, presumably “sometime in July, probably in the next two or three weeks.”

Pompeo added that his counterparts will “like to be one of a couple” officials of the North’s Foreign Ministry, though he did not elaborate who.

An elevated role for Pyongyang’s Foreign Ministry was apparent throughout the extraordinary series of events surrounding Kim and Trump’s third - and most hurried - meeting at the border village of Panmunjom.

According to one of the North’s state mouthpieces, the Korean Central News Agency (KCNA), Foreign Minister Ri Yong-ho accompanied Kim in his one-to-one talks with Trump, becoming the counterpart to Pompeo. In the two earlier U.S.-North summits, Kim Yong-chol, head of the UFD, stood by Kim Jong-un as his chief aide in the talks, demonstrating his role as the regime’s top negotiator with Washington.

Kim Yong-chol was sacked as UFD director in April, apparently as a result of the collapse of the second summit in Hanoi, Vietnam, though he retains his seat as vice chairman of the Central Committee of the North’s ruling Workers’ Party.

Taking his place as head of the UFD - the country’s top agency dealing with relations with South Korea, including espionage against it - is a virtual unknown, Jang Kum-chol, who was spotted Sunday standing on the sidelines at Panmunjom with other North Korean officials in the leader’s entourage.

Another indication that the Foreign Ministry has leapfrogged the UFD as the leading agency in the negotiations is the fact that the North’s response to Trump’s abrupt proposal on Twitter for a meeting in the demilitarized zone was delivered through Vice Foreign Minister Choe Son-hui.

On Saturday afternoon, Choe released a statement through KCNA calling Trump’s suggestion for a border meeting with Kim “interesting” and saying that a meeting between the two would be “meaningful.” With the summit taking place just hours later, experts say Choe’s words suggested she was acting as Kim’s de facto spokesman in his engagement with the United States.

Choe was reportedly the last person sitting at the negotiation table in February in Hanoi who unsuccessfully tried to offer the dismantlement of the Yongbyon nuclear complex in exchange for sanctions relief.

At a press conference in March, she slammed U.S. officials for rejecting the proposal. In April, she was elevated to First Vice Foreign Minister and given a seat on the State Affairs Commission, the highest decision-making body headed by Kim Jong-un himself. On Sunday, she was observed sharing a brief private chat with Biegun while their leaders were in discussions.

If Pompeo is correct, Choe and Ri could be taking over the role of Kim Yong-chol and the North’s previous top nuclear envoy, Kim Hyok-chol, who was the subject of media speculation last month. South Korean conservative daily Chosun Ilbo reported that he had been executed on espionage charges. Later reports, like one from CNN in early June, alleged he was still alive but under investigation for the failure of that summit.

Almost all of Kim Jong-un’s aides were changed in Panmunjom on Sunday, from his assistant down to his translators. Hyon Song-wol, the deputy party propaganda director and leader of the North’s Samjiyon Orchestra, took over from Kim Yo-jong, Kim Jong-un’s younger sister, as Kim’s personal assistant.

In another country, the Foreign Ministry replacing the UFD as the main agent in the talks would not bring about significant changes, given that officials like Choe were already at the center of earlier working-level negotiations, including discussions she had with Biegun in January in Sweden. But analysts say the change could have implications in particular for South Korea, given that the UFD is primarily concerned with inter-Korean relations. The UFD had pushed for better relations with Seoul at the onset of the engagement process.

After Hanoi, the Foreign Ministry may have won out in an internal debate over the trustworthiness of South Korea as a mediator in the talks, which could explain why Pyongyang gave Seoul such a cold shoulder in recent weeks.