A round of dangerous golf

A round of dangerous golf 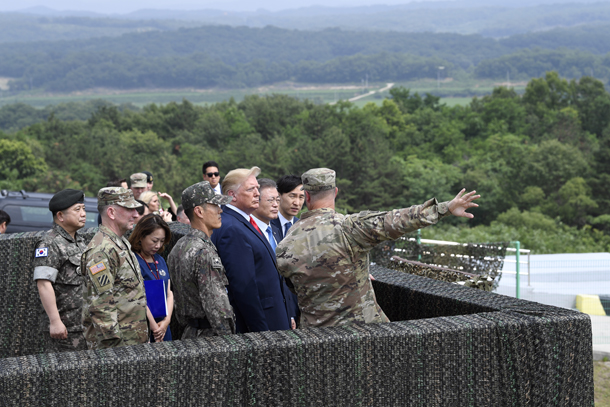 Can you swing your golf club on a 430-meter (1,410-foot) cliff? You can at a golf course in South Africa, which is considered one of the most dangerous courses in the world. The extreme 19th hole is a par-three golf hole on top of the regular 18-hole course, and golfers play the tee shot at an altitude 100 meters higher than Mount Inwang in Seoul. The green — more than 500 meters away — faces a cliff. Tourists access the tee via helicopter for the thrilling experience.
A
There had been a golf course in Korea that also called for courage. A sign that says, “World’s Most Dangerous Golf Course,” remains. It is a 170-meter-long par-3 hole in Camp Bonifas in the Demilitarized Zone. It is surrounded by minefields. When the ball landed in the rough, players weren’t able to look for it. It was described as the most “lethal” golf course in a sports magazine, but it is not in use today.

On June 30, President Moon Jae-in visited Camp Bonifas with U.S. President Donald Trump, and stories about Panmunjom were discussed. The tragic history was highlighted, as the camp is named after U.S. Army Captain Arthur Bonifas, who was killed in the Axe Murder Incident in 1976. Will the dangerous past be replaced by new stories?

The leaders of South and North Korea and the United States called the meeting a historic event. I hope North Korean leader Kim Jong-un was not bluffing when he said the handshake for peace between the leaders of two countries who had been hostile in the past showed how different today is from the past. I hope to see the lethal golf course plagued by landmines turned into the most peaceful golf course in the world.