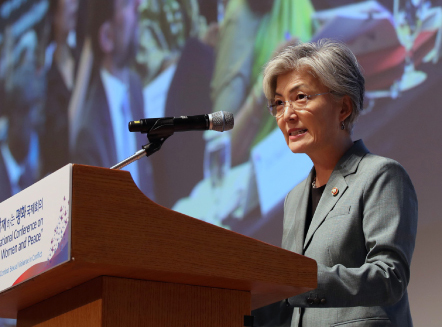 “Previous efforts on this issue had been grossly lacking. ... The Korean government will continue to heed their voices and do as much as we can in restoring their dignity and honor,” she told an international conference on women and peace in Seoul.

The two-day conference, hosted by the foreign ministry, was held to mark the government’s new initiative “Action with Women and Peace” launched last year and aimed at preventing various forms of human rights violations and abuse of women.

Kang noted that because of the history with “comfort women,” Korea understands more than any other country the suffering of women who fall victim to sexual violence.

“We empathize profoundly with victims of conflict-related sexual violence wherever it takes places, and based on our historical experience, the Korean government has been actively participating in global efforts to advance the agenda of woman, peace and security,” Kang said.

Historians say that around 200,000 Asian women, mostly Korean, were forcibly sent to front-line brothels to provide sex services for Japanese soldiers during World War II. Korea was under Japan’s colonial rule from 1910-45.

Denis Mukwege, a Congolese doctor and Nobel Peace Prize co-winner who was one of the guest speakers at Tuesday’s event, said the confessions by Korean sexual slavery victims have greatly contributed to putting the issue of sexual violence on the international agenda.

“I’d give a big hand to their courage, which has provided a source of inspiration to other victims,” he said in a keynote speech through an interpreter.

Mukwege, a gynecologist and pastor, has been credited for his decades-long dedication to treating women who were raped by armed rebels. He was jointly awarded the peace prize in 2018. Throughout the speech, he highlighted the importance of a survivor-centered approach, as stipulated in United Nations Security Council Resolution 2467, adopted in April, to tackle sexual violence in conflict.

“The survivor-centered approach gives victims the power to break the silence. We must help them do so when they want to raise their voice and give them support over the course of their testimony,” he said.

Mukwege said that a lot of nations “ignore, deny or implicitly tolerate sexual violence” and called for “timely compensation” by such states.

Despite the substantive progress made by the international community against sexual violence on women, Kang pointed out that such crimes persist in the world and called for more tangible action for prevention.