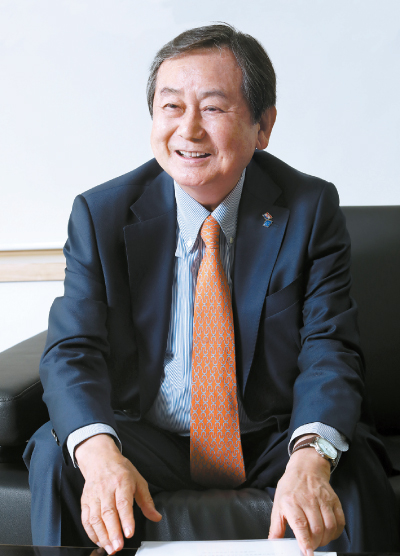 Yang In-mo, dean of the Corps of Honorary Consuls in Korea and honorary consul of Croatia, speaks with the Korea JoongAng Daily on Monday about the upcoming World Congress of Consuls, which will be held in Seoul for the first time in 2021. [PARK SANG-MOON]

In two years, hundreds of consuls from around the world will gather in Seoul to discuss the future of diplomacy on the Korean Peninsula.

“The 13th World Congress of Consuls will be hosted in Seoul in 2021,” said Yang In-mo, dean of the Corps of Honorary Consuls in Korea. “This will be the first time Korea hosts the event, which is held every three years and is organized by the World Federation of Consuls.”

The Corps of Honorary Consuls in Korea will be working with the World Federation of Consuls to host the event in Seoul in 2021, which is expected to draw around 500 consuls and their spouses, according to the organization.

“There is a growing interest among consuls around the world in the thawing of inter-Korean relations,” Yang said. “They want to come and experience and witness these changes taking place on the Korean Peninsula.”

Yang was inaugurated as the dean of the Corps of Honorary Consuls in Korea on Monday.

There are 132 honorary consuls in Korea who have been accredited by 102 countries, according to the Corps of Honorary Consuls in Korea. They are mostly businesspeople and professors with networks in Korea and the representative countries.

“Some countries do not have the physical presence of an embassy and diplomats in Korea,” Yang said. “For these countries, when there is a diplomatic emergency, some of the honorary consuls are called to step in.”

Previously the president and CEO of Samsung Engineering, with experience in Germany and Croatia, among other countries, Yang has been an honorary consul of Croatia since 2007. The Croatian Embassy was established in central Seoul in October 2018. With the establishment, the Croatian government awarded Yang the Order of Ante Starcevic.

Yang recalled some moments when he had to step in for the interest of Croatian citizens in Korea.

“A Croatian participant at the PyeongChang Winter Olympics needed some help communicating with the Korean government,” Yang said. “At the time the Croatian government did not have diplomats stationed in Korea, so I was called in. I immediately drove to Gangneung and helped the athlete sort out the issue.”

Usually at least one diplomat per country has a phone that works as a type of 24/7 hotline for citizens of the country to call in times of emergency. Even when the phone rings at odd hours during the night, the diplomat is expected to pick up.

“It’s not like we have that kind of a hotline system, but we do sometimes get phone calls from the government of the country in the middle of the night, and we know it’s an emergency then,” Yang said. “We try to act on the matter immediately.”

On the first day of his two-year tenure as the dean of the Corps of Honorary Consuls in Korea, Yang spoke to the Korea JoongAng Daily about the honorary consuls’ experience engaging in public diplomacy and the upcoming World Congress of Consuls in 2021.

Q. Tell us about the World Congress of Consuls.

A. The World Congress of Consuls is a gathering of associations of consuls around the world, and it is held every three years. It is organized by World Federation of Consuls, which holds the status of a United Nations NGO, and the last one was held in Brussels in 2018.

Korea won the bid to host the event in 2021. It will be held in Seoul from Oct. 9 to 13 in 2021 and we expect around 500 consuls and their spouses. The Corps of Honorary Consuls in Korea will be working closely with World Federation of Consuls, Korea’s Ministry of Foreign Affairs and the Seoul Metropolitan Government to host the event in 2021 and further Korea’s diplomatic interests around the world.

What factors about Korea made it a successful bidder?

There is a growing interest among consuls around the world in the thawing of inter-Korean relations. They want to come and experience and witness these changes taking place on the Korean Peninsula.

Tell us about the origins of the Corps of Honorary Consuls in Korea. How are the honorary consuls selected?

The Corps of Honorary Consuls in Korea was established in 1972 and today we have 132 honorary consuls accredited by 102 countries. Basically, they go through the same agrement process that diplomats go through - the foreign government informs the Korean government that they’d like to accredit an individual as an honorary consul of the country, and the Korean government, after checking the credentials of the person, approves or disapproves the choice.

What exactly are the job requirements of an honorary consul?

Honorary consuls, like consuls in general, protect the representative country’s interests and their citizens, and work on boosting the business relations between the two countries.

In my case, as an honorary consul of Croatia during the years that the embassy was not yet established in Korea, I assisted with visa-related matters for the government of Croatia in some special cases. For the honorary consuls representing countries without an embassy in Korea, we tend to be called in to respond to emergency situations related to the citizens of the country in Korea. But on a daily basis, we use our networks in Korea to bridge them with networks in our representative countries to boost people-to-people exchanges and public diplomacy.

How do you define public diplomacy?

For instance, the Corps of Honorary Consuls in Korea have been funding international students to study at Incheon National University for years and we have also communicated with various organizations in Korea in times of national disasters in a country, to gather funding and support and convey them to the nation. During the earthquake in Nepal in 2015, the honorary consuls assisted the Korean government to communicate with the local Korean communities in Nepal.

We also work closely with ambassadors in Korea and from last year we began awarding ambassadors with the Ambassador of Public Diplomacy Award together with the Korea JoongAng Daily. We look forward to witnessing more of their engagements with the public of Korea this year.