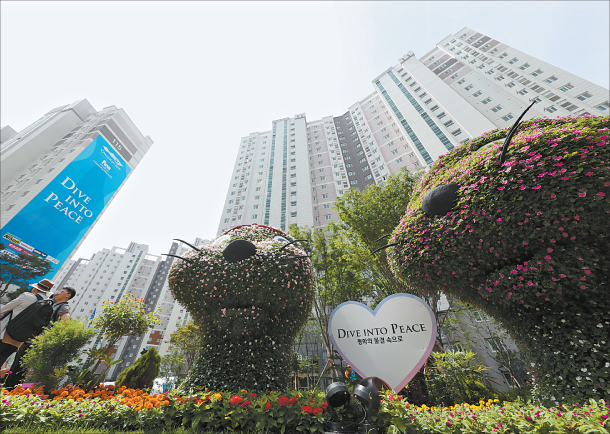 Mascots of the FINA World Championships Gwangju 2019 at the athletes’ village in Gwangsan District, Gwangju, on Tuesday. [Yonhap]

The athletes’ village for the FINA World Championships Gwangju 2019 was opened to the media for the first time on Tuesday, showcasing a variety of relaxation, convenience and recreational facilities.

The first International Swimming Federation - or FINA - championships to be hosted by Korea will kick off on July 12 in Gwangju and Yeosu in South Jeolla and continue through July 28.

The athletes’ village, whose construction was completed in March in Gwangju’s western district of Gwangsan, will accommodate about 4,000 athletes and officials and approximately 2,000 media workers covering the event.

It will formally open on Friday and operate through Aug. 21 after additionally accommodating participants in the 2019 FINA World Masters Championships slated for Aug. 5 to 18 in the same cities.

The 94,131-square-meter (23-acre) village, which consists of 1,660 apartments in 25 buildings with 15 to 25 floors, is only 10 minutes by car from Gwangju Airport, 12 minutes from Songjeong Station and 15 minutes from the main venue of the biennial aquatics championships.

The village, divided into three separate zones - international zone, athletes zone and media zone - has various convenience and support facilities that are equal to those of four-star hotels, village officials said.

In addition, beauty salons, a flower shop and game rooms are housed in the athletes’ village, while the main restaurant will serve Asian, European, halal and Korean food to meet the various tastes and requirements of the athletes and officials.

About 100 different kinds of foods will be offered for three meals a day, village officials said.

The media zone has its own cafeteria, cafe and convenience store.

Floor fountains and cooling fog generators are installed throughout the village to help its residents fight the summer heat, while images of the championships mascots - Suri and Dari - and other promotional materials have been put up on the outer walls of apartment buildings and on the lawns.

“The athletes’ village will be a space of peace, harmony and friendship for young athletes from across the world. All efforts will be made to make the village a comfortable home for all,” said Choi Jong-sam, head of the Gwangju athletes’ village.