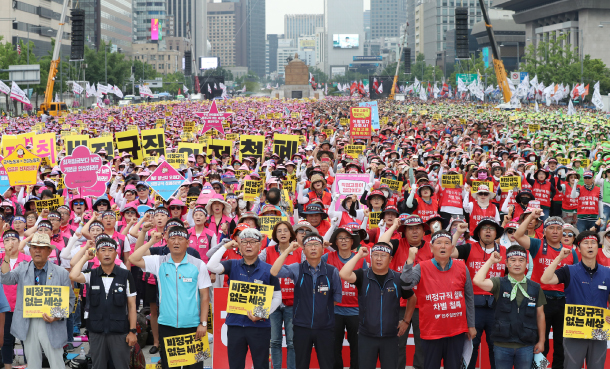 Public sector contract employees who are members of the Korean Confederation of Trade Unions (KCTU), an umbrella organization representing around a million members nationwide, take part in a rally in Gwanghwamun Square in central Seoul on Wednesday afternoon. [NEWS1]

Around 2,500 contract workers at elementary, middle and high schools, which included bus drivers, cafeteria cooks and janitors, took part in rallies across Seoul on Wednesday calling for an increase in their basic incomes and an elevation of their status to workers on regular payrolls.

The biggest was held in Gwanghwamun Square in central Seoul, where around 40,000 contract workers gathered, according to the rally’s organizers. The Labor Ministry estimated the number of attendees at around 26,000.

The strike and rallies are set to continue until Friday.

This week’s rallies, organized by the Korean Confederation of Trade Unions (KCTU) - an umbrella organization representing around one million members nationwide - are supposed to draw an estimated 100,000 contract workers in the public sector, with around half of them working at around 6,000 schools across Korea.

Contract workers get no job security, and many are outsourced from contracting companies. 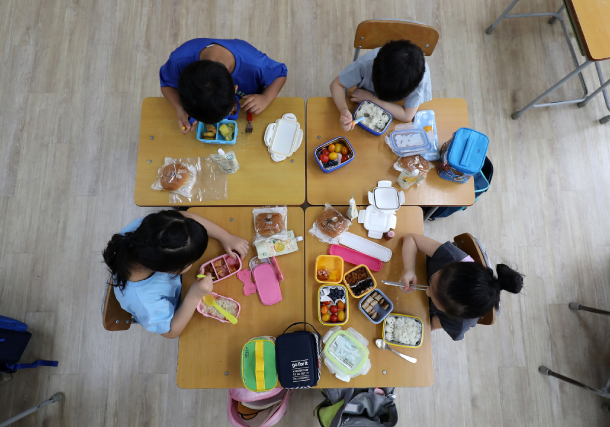 Due to this week’s strike, education officials believe students in about around 4,600 schools - 44.1 percent of the 10,426 schools nationwide - will be denied cafeteria meals.

To feed students in the affected schools, education offices in some provinces and municipalities distributed a variety of foodstuffs - mainly consisting of bread and milk - or asked parents to pack their children’s lunches.

At other schools, classes were cut short altogether, to many students’ delight.

While the government has tried to negotiate with the workers’ unions, little headway has been made. The unions are demanding a wage hike of 6.24 percent compared to an offer by public education offices of 1.8 percent. The workers also demanded that their wages be raised to a level equivalent to 80 percent of the lowest-ranking civil servants’ salaries.

A last-minute discussion between the two sides fell apart on Tuesday after union leaders said the Education Ministry had no interest in presenting a solution to the wage issue or alleviating the discrimination against contract school workers.

Union leaders in Gwanghwamun Square Wednesday demanded that President Moon Jae-in step forward to resolve their plight, as he promised in his presidential campaign in 2017 to put many of the country’s public sector employees on permanent payrolls.

“The government and education offices justified employment discrimination during the negotiations but [pretended they are] open to compromise to the press,” said one contract school workers’ union leader, Park Keum-ja. “Today’s general strike is the result of lies, irresponsibility and the hypocrisy shown by the [government].”

The government is facing a number of industrial actions this month. Next Tuesday, the country’s postal workers are set to hold a general strike, while the KCTU has announced it will launch a nationwide strike among all its subsidiary unions starting from July 18.

The latter strike, which the KCTU argues is meant to protest the Moon government’s suppression of labor, was prompted in part by the arrest of its chairman, Kim Myeong-hwan, on charges of inciting violence late last month. The union, the second-largest labor group in the country, argues that Moon is going back on the labor-friendly promises he made while running for president by waffling on raising the minimum wage further and strictly enforcing shorter working hours.