Apartment prices in Seoul rebounded after an eight-month slump, signaling a possible turnaround in the stalled market.

The state-backed Korea Appraisal Board (KAB) said Thursday in its weekly apartment price report that the apartment price index for the capital city rose 0.02 percent this week compared to a week earlier. 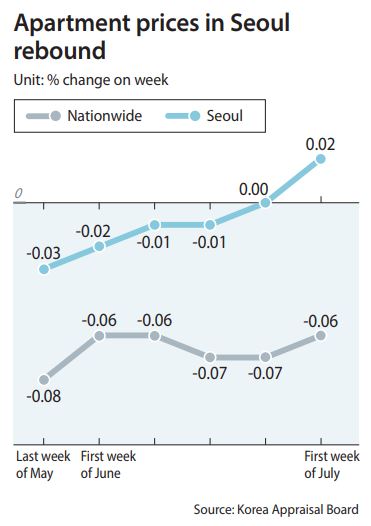 This is the first weekly rise for apartment transaction prices since the first week of November last year. The price index for Seoul last week was unchanged.

The KAB explained that the price index for Seoul rose due to increased transaction volume in newly developed and redeveloped areas.

While prices in Seoul’s 14 districts north of the Han River rose 0.01 percent on average compared to the previous week, prices in 11 districts south of the river increased 0.02 percent. Prices in Yeongdeungpo District in western Seoul rose 0.06 percent, while in Yongsan District in central Seoul, prices edged up 0.05 percent.

The KAB report also said that prices for jeonse, or long-term deposits, rose in the capital city, increasing 0.01 percent last week from a week earlier, the first time since the final week of October last year.

Private real estate trackers, such as Budongsan 114, reported that apartment prices in Seoul started to rise since the second week of June.

According to KAB data, prices in the capital city this year fell on average of 1.65 percent compared to a year earlier. Seoul apartment prices last year rose 3.77 percent from the previous year.

The Ministry of Land, Infrastructure and Transport has announced plans to approve construction of 110,000 residential units.

Apartment prices nationwide continued to fall this week, declining 0.06 percent compared to a week earlier. Data, however, showed that the rate of decline slowed compared to the past two weeks when prices fell by 0.07 percent on both weeks.

In the port city of Incheon, west of Seoul, prices rose 0.02 percent this week from a week earlier due to demand in newly developed areas.

“The government has expressed a strong intent to cool the real estate market so it is unlikely for the rebound to continue in the long term,” explained Kwon Dae-jung, professor of real estate at Myongji University.