Los Angeles Dodgers starter Ryu Hyun-jin has wrapped up a terrific first half of the season with a long-awaited victory.

The Korean left-hander shut down the San Diego Padres over six innings at Dodger Stadium in Los Angeles on Thursday, holding them to three singles while striking out five. The Dodgers went on to win 5-1. 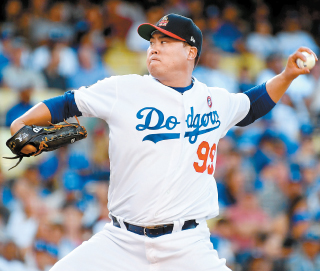 Ryu Hyun-jin of the Los Angeles Dodgers throws a pitch against the San Diego Padres at Dodger Stadium in Los Angeles on Thursday. [GETTY IMAGES/YONHAP]

Ryu also issued a season-high three walks, a rarity for a pitcher who had allowed only seven walks all season across 16 starts.

Walks aside, this was a strong bounce-back performance for Ryu, who was shelled for a season-worst seven earned runs in four innings against the Colorado Rockies in his previous start last Friday.

Ryu is the first Korean to start the All-Star Game and the fourth player from his country to appear in the Midsummer Classic.

After a clean first inning, Ryu got into a jam with men at the corners with two outs in the second inning. Prior to the game, opponents had gone 1-for-31 against Ryu with runners in scoring position at two outs, and the trend continued, as Ryu struck out Austin Hedges to keep the Padres off the board.

Max Muncy spotted Ryu a 1-0 lead with a solo shot in the bottom second, and Ryu worked out of another two-out jam in the third with men at first and third. A single and an error after two outs put runners at the corners, but Ryu got Franmil Reyes to ground out to first base.

Ryu pitched around a two-out walk in the fourth and induced three straight groundouts in the fifth. The Dodgers’ offense gave their starter a bit more breathing room with a pair of runs in the bottom fifth, and Ryu responded with a three-up, three-down inning in the sixth.

Ryu walked Manny Machado on four pitches to start the frame, but Reyes grounded into a 4-3 double play and Hunter Renfroe lined out to shortstop to kill a potential Padres rally.

Cody Bellinger launched his 30th home run of the season for the Dodgers in the bottom sixth for a 4-0 lead, and a Chris Taylor sac fly later that inning put the Dodgers ahead 5-0.

Ryu was lifted for a pinch hitter during that sixth inning, having thrown 89 pitches, 57 for strikes.

The Padres got a run back in the top of the eighth, but the Dodgers bullpen limited the damage to one run.