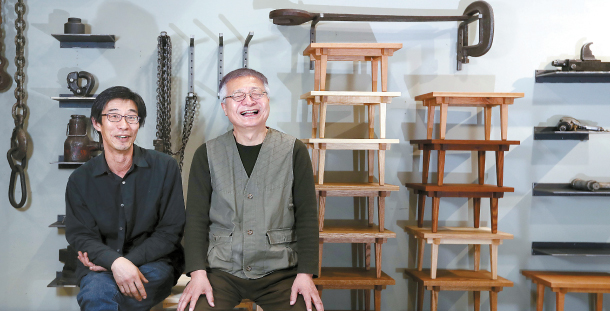 Woodworker Lee Jeong-seob, left, and adviser Kim Min-sik, who run the The Naechon woodworking shop in Hongcheon County, Gangwon, pose for a photo in front of their work. Kim believes that wood can make people wiser and also change their lives. [SHIN IN-SEOP]

Kim Min-sik, adviser to the renowned woodworking shop The Naechon in Hongcheon County, Gangwon, has traveled over 4 million kilometers (2.5 million miles) around the world to find the world’s highest-quality wood.

Kim has been in the wood trading business for around 40 years as a consultant and dealer. He works at The Naechon with woodworker Lee Jeong-seob in a secluded mountain valley in Hongcheon. Kim offers consultations for customers and also finds a market for Lee’s hand-crafted furniture.

The Naechon has also built and sold 15 houses in Hongcheon. The shop’s wooden houses can also be found in places across Korea like Pyeongchang-dong in Jongno District, central Seoul, and on Jeju Island.

The shop offers environmentally-friendly furniture and is often visited by famous Korean and foreign designers and architects.

Kim and Lee met each other in 2006. Lee had been working at his woodworking shop in Hongcheon since 2003. After hearing about Lee’s astounding woodworking skills, Kim visited the shop and was awed by Lee’s ability and philosophy. Kim soon built a house next to the shop and moved in.

“It was intriguing that a young man in the mountains would think of using wood that is usually used for making top-grade musical instruments for furniture,” said Kim. “I later found out that he had an eye for good materials.”

The Naechon is frequently visited by company heads and politicians looking for furniture. Tours of the workshop are available with a reservation, and some customers plead for the shop to open woodworking classes. After looking around at the furniture and homes, people can also attend a talk about wood and trees by Kim.

Carpentry has recently grown in popularity, which some carpenters explain as an effort by people to find work and life balance or create a one-of-a kind piece of art. Kim, however, thinks differently.

“The Chinese traditional letter for study is a [logogram] of a boy supporting a roof,” Kim said. “People want to learn something by using their bodies and because the material at hand is wood, it becomes more romantic.”

Kim explained the reason wood is so attractive is because unlike the material around us that is mass produced in factories, like concrete, glass, plastic and steel, wood comes from nature.

“Even clothes made of natural material like silk are more expensive than polyester ones,” Kim said. “When, [guests] visit Britain, the best reception that they can get from Queen Elizabeth is riding in the queen’s wooden carriage, not a Rolls-Royce.”

Kim recently published a book, the Korean title of which can be roughly translated as “The Time of Trees.” In the book, Kim shares interesting stories about trees that most people are unfamiliar with. The stories discuss how Finland left its mark in design history for its cheap birch plywood, introduce the Korean tradition of planting a paulownia tree when a daughter marries and share how Gibson, an American guitar company in Tennessee, was caught in a scandal for illegally obtaining endangered wood protected by a U.S. law.

In the book Kim also criticizes people who share false information about trees. Kim said that he feels sad that people are so ignorant of the trees that surround us, but are enraged when car companies lie about their automobile exhaust fumes.

Kim said that trees are living museums when compared to concrete and plastic, which have short histories.

“There are a lot of varieties of wood in the world and the best producers are all different,” said Kim. “Oak trees are imported from the eastern part of the United States, maple trees come from Canada and beech trees come from Germany and France.”

Trees can also change people’s lives and make them more insightful, according to Kim.

“When I find a tree that I really like, I read history, philosophy, art and literature books because I am interested in its story,” Kim said. “It is a new way to look at the world.”