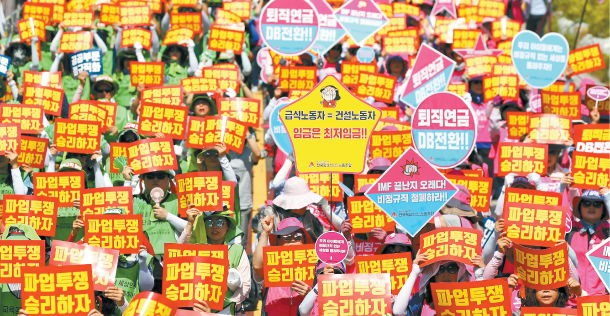 Unionized contract workers at public schools hold a rally led by the Korean Confederation of Trade Unions (KCTU) in front of the Seoul Metropolitan Office of Education in central Seoul on Friday amid a heat wave warning across the country. The school contract workers’ unions announced later that afternoon they will end their three-day strike and return to work on Monday. [YONHAP]

Unionized contract workers at public schools said Friday that they will end their three-day strike and return to work on Monday.

An alliance of school contract workers’ unions held a press conference in the afternoon and announced their decision to end the strike.

“We will believe the education authorities’ promise that they will have serious negotiations with us in order to improve working conditions and increase wages,” said a representative of the alliance. “We will end the strike today and return to schools Monday.”

The contract workers at elementary, middle and high schools started a three-day strike on Wednesday, demanding a 6.24-percent increase in their base salaries and better benefits. They also demanded the government introduce a “fair wage system” before the end of President Moon Jae-in’s term, in which their salaries would be 80 percent of the lowest-ranking public servants.

Contract workers, often referred to as “non-regular workers” in Korea, have little job security, and many are outsourced from contracting companies.

Since Wednesday, the strikers have participated in rallies co-organized by the Korean Confederation of Trade Unions (KCTU), a militant umbrella organization representing around one million members nationwide.

According to the Education Ministry, a combined total of 52,000 workers participated in the three-day strike. It is the largest and the longest strike by the contract school workers, the ministry said.

The alliance, however, said a combined total of 100,000 workers went on strike. The Education Ministry and the alliance are scheduled to resume negotiations next week.

As the walkout entered the third day on Friday, the number of strikers dropped significantly from the previous days and parents’ complaints about the situation increased, blaming both the strikers and the government.

“My kid has strong appetite these days, and I feel sad that he is eating just a piece of bread and a beverage as lunch for three days,” said a 43-year-old mother of a sixth grader in southern Seoul’s Gangnam District. “Why do innocent students and parents have to suffer because of the fight between the government and the workers? I don’t understand why the Education Ministry is doing nothing. Maybe the parents have to stage a protest to protest the strike.”

According to the Ministry of Education, 8.7 percent of the country’s 151,809 contract-based school workers from around the country participated in the strike on Friday. The number was down by 4,061 from Thursday.

Although the strikers were returning to their workplaces, lunch services at many schools were still disrupted. On Friday, lunch at 1,474 schools, or 14.1 percent of the elementary, middle and high schools nationwide, was not provided.

The number also went down from the 2,802 schools on the first day of the strike and 1,771 in the second day, but students are still suffering from inconveniences.

The ministry said 987 schools offered a piece of bread and milk, while 311 schools asked the students to bring their own lunch boxes. Another 103 schools ended class before lunch time, while 73 schools allowed students to eat outside the campus.

The strike also continued to affect after-school programs. Of the 5,980 public elementary schools where after-school activity programs are offered for children of parents who both work, 62 did not have classes on Friday. The number fell by 30 from the previous day.

It is the fifth time that the school contract workers have gone on strike since their first walkout in 2012. They held strikes in 2014, 2016 and 2017, demanding direct employment by education offices and a better payment system.

Public criticism also grew that the strikes continue because the government failed to present a fundamental resolution to the problem. On Thursday, Vice Education Minister Park Baeg-beom held a meeting with deputy heads of metropolitan and provincial education offices, but failed to reach a solution.

The participating officials only agreed to an ambiguous plan to “have talks with workers in the long term to create a reasonable pay system.”