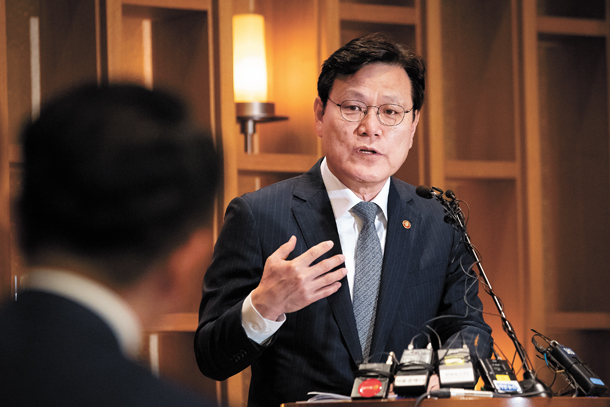 Financial Services Commission Chairman Choi Jong-ku answers questions during a meeting with local journalists at a restaurant near his office in downtown Seoul on Friday. [FINANCIAL SERVICES COMMISSION]

If Japan plays hardball with Korea in the financial markets - by ending investment rollovers or withdrawing loans borrowed in yen - it will have little impact on Korean banks or companies, Financial Services Commission (FSC) Chairman Choi Jong-ku said.

“There are [retaliatory financial actions the Japanese government can take, such as] withdrawals of loans and investments and limiting remittances,” Choi said Friday while meeting with the local press.

“However, there are none that will be meaningful,” he said.

Korea is bracing for more retaliatory actions by Japan after it started last week restricting exports of key materials for making semiconductors and displays, seen as a protest of Korean Supreme Court rulings ordering Japanese companies to compensate Korean forced laborers during the colonial period.

The Shinzo Abe administration could remove Korea from its so-called white list of 27 countries that pose no security threats and get preferential treatment on export applications.

But Choi said Korea is less vulnerable today than it was 10 years ago.

He said the government is already monitoring the situation.

“We’re not at a stage to discuss the issues with the Japanese financial authorities,” Choi said. “It would be best that the overall government problem is announced through [Korea’s] Ministry of Trade, Industry and Energy and the Deputy Prime Minister for the Economy [Finance Minister Hong Nam-ki],” Choi said.

In March, Japanese Finance Minister Taro Aso warned that Japan could halt remittances and visa issuances in retaliation for the Korean court rulings.

This is not the first time that diplomatic friction between the two countries had financial or economic repercussions.

A currency swap arrangement between the two countries was ended in February 2015 after a diplomatic disagreement. After the late 1990s financial crisis, Korea tried reinforcing its financial safety net by increasing its foreign exchange holdings and setting up currency swaps arrangements with friendly nations. Korea and Japan signed their first currency swap agreement in July 2001, to the tune of $2 billion.

That agreement was expanded to $30 billion in 2008 following the global financial meltdown, and it increased to $70 billion in 2011. The Japanese government decided not to extend the currency swap when it matured in 2015 in protest to President Lee Myung-bak’s visit to the controversial Dokdo islet in August 2012. The Japanese also claim the Korean islet and call it Takeshima.

FSC Chairman Choi on Friday also raised the need to aggressively expand government spending to turn around a weakening economy.

When asked if more aggressive spending would raise the country’s debt-to-GDP ratio over 40 percent, Choi said, “It’s the same as saying we should die starving since we’re left with little rice.”

“We need to eat [the remaining] rice and work hard.”