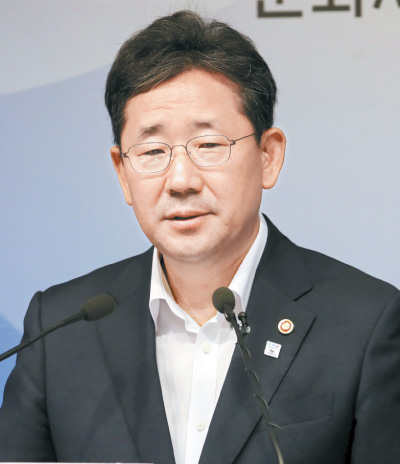 Park Yang-woo, minister of culture, sports and tourism, met with local reporters on Monday at the ministry’s Sejong government complex and reviewed what he’s done in the first 100 days since his inauguration.

“Policies can’t be changed overnight or in just 100 days,” he said. “But the ministry will continue to pay attention to the areas that are in urgent need of change.”

For example, Park explained that the gaming industry is one of Korea’s largest exporters and contributes to the 8.8-percent export surplus. Yet the majority of Koreans perceive the industry negatively, considering it an addictive form of entertainment that poses health risks to children and adults alike.

The World Health Organization (WHO) recently made “gaming disorder” an official medical condition. Whether to recognize this diagnosis has been fiercely debated in Korea, with especially heavy criticisms and objections coming from the gaming industry.

Park said the Culture Ministry has continued to resist the designation by sending a letter to the WHO, as well as making attempts to transform perceptions of the gaming industry among the general public.

“Over the past 20 years, the news about gaming that the general Korean public reads or hears has only been reported as [a matter of national and social concern]. Most reports are about shocking incidents, like young parents forgetting to feed their infant due to gaming addiction or teenagers dying of a health problem after playing games for four days straight without eating or sleeping.”

These news reports, which were true, made many Koreans believe that playing games is harmful, according to Park.

He said that the Culture Ministry and the media should work together to highlight the social value of gaming and the technological and economic potential of the industry.

Park also stressed that thus far, Koreans generally believe that “culture does not put food on the table.” Yet figures disprove the belief, he said, indicating that “although the exact figures have yet to be calculated exactly, Korea’s cultural industry grew to about 120 trillion won [$101.64 billion]. If we include sports, it’s about 210 trillion won.”

“Culture definitely does put food on our tables,” Park added.

“Therefore, the ministry will continue to support and encourage all industries that are faring well and have a lot of potential so that the public knows exactly why the government exists.”