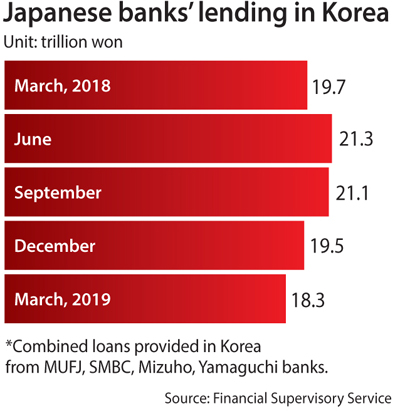 As tensions escalate over Japan’s economic retaliation against Korea, investors and analysts worry that the finance sector will soon be affected through potential pressure on investment rollovers or withdrawing loans.

There is already some evidence that this might be the case - outstanding loans from four major Japanese banks operating in Korea have been on a steady decline entering this year.

Of the four banks, Mizuho Bank gave the largest amount of loans at 8.2 trillion won, followed by MUFJ’s 5.8 trillion won.

Still, it remains unclear whether the downturn was triggered by the Japanese government’s push to impose export curbs and other retaliatory measures since Japanese banks were already on track to reduce cross-border loans.

“Backed by Japan’s rock-bottom interest rate, the banks expanded their lending to foreign companies, but started scaling back the exposure at the end of last year through this year due to concerns surrounding a slowdown in the global economy and economic headwinds,” said a source in the finance sector with knowledge of Japanese banks’ operations in Korea.

And even if the banks pull the plug on their loan services, the source said, the impact won’t be great.

“Many of the corporate clients holding the loans are Korean conglomerates with sound fiscal status,” he said. “So even if the banks refrain from extending maturity or loan size, it is unlikely that the move will pose great risks to the companies.”

Still, the cost of borrowing money could increase, albeit slightly.

The view echoes that of the country’s financial authorities.

“There are [retaliatory financial actions the Japanese government can take, such as] the withdrawal of loans and investments and limiting remittances,” Choi said Friday while meeting with local press. “However, there are none that will be meaningful.”

Loans from Japanese banks account for 27 percent of all loans from foreign banks, the second highest after lending from Chinese banks, at 34 percent.

Despite the positive outlook, the markets tumbled on Monday with the main Kospi bourse losing 2.2 percent and the junior Kosdaq down 3.67 percent.

But analysts attributed the decline to the subdued expectation for an interest rate cut, following healthy jobs data in the United States.