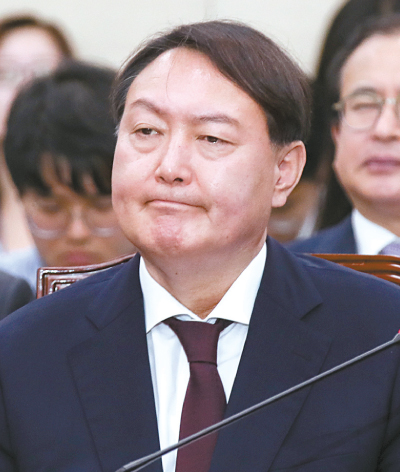 President Moon Jae-in’s nominee to take over as Korea’s prosecutor general, Yoon Seok-youl, pledged to conduct a major overhaul of the country’s top investigative agency at his first confirmation hearing on Monday.

In an opening statement at the National Assembly Monday morning, Yoon disavowed the shady practices of prosecutors in the past and stressed that he would bring the prosecution back to its basic principles of serving the people.

“I believe prosecutors should not be architects of policy, but rather faithful enforcers of existing policy,” Yoon said. “However, the criminal justice system is directly linked to the public good, so there is no room for error, nor can there be blind spots in dealing with the protection of the people and corruption.”

Above all, Yoon said, prosecutors under his watch would strictly abide by political neutrality, dealing with political cases by the letter of the law.

“Never again shall [prosecutors] chase or compromise with political ideas far off from public expectations,” he said. “If I become prosecutor general, I will deal strictly with foul play and exploitation that makes the lives of the socially vulnerable difficult.”

The strong positions laid out in Yoon’s speech in many ways reflect his firebrand reputation, which is believed to have prompted President Moon to tap him to complete his administration’s overhaul of the country’s law enforcement agencies.

Regarding the ruling Democratic Party’s (DP) push for judicial reform, Yoon took a step back, saying the final say in carrying out institutional changes was the prerogative of the legislature and the people.

In this, Yoon appeared to distinguish himself from the outgoing prosecutor general, Moon Moo-il, who before leaving office later this month publicly protested lawmakers’ proposals to reduce the scope of prosecutors’ responsibilities and readjust their balance of power with the police.

Nonetheless, Yoon later said in response to lawmakers’ questions that he would prefer to see the relationship with the police be one of “mutual cooperation” in which prosecutors have their authority to launch investigations be “gradually reduced” if the corruption-fighting capacity of the country’s law enforcement as a whole is elevated. While in ostensible agreement with the DP bill, which proposes abolishing prosecutors’ authority to direct police investigations, the remark could be interpreted to mean he believes prosecutors should continue to exercise control over investigations.

Yoon, however, stressed that prosecutors could not give up their “fundamental” authority to file warrants for arrests and investigations, which he said should only be sought when there is a certainty of indictment. Legal experts and critics have long cited prosecutors’ monopoly over arrest requests and their sole prerogative to indict as the sources of their perceived power over the government, including elected officials, who have at times sought to co-opt prosecutors through corrupt bargains.

Nominated by the president late last month, Yoon is best known for carrying out exhaustive investigations that eventually landed a litany of conservative figures - including President Park Geun-hye and President Lee Myung-bak - in prison.

Not surprisingly, the right-wing opposition, led by the Liberty Korea Party (LKP), accuses Yoon for being partial to the Moon administration, which in May 2017 appointed him chief of the Seoul Central District Prosecutors’ Office, the most senior position in the organization after prosecutor general.

On Monday, LKP lawmakers followed through on their pledges made last month to try to stop Yoon from becoming prosecutor general at his confirmation hearing, vociferously demanding that he submit more documents on his family wealth.

According to records, Yoon’s family has over 6.5 billion won ($5.48 million) worth of assets, mostly owned by his wife. The LKP brought up speculation that Yoon’s wife may have avoided taxes while accumulating this wealth and accused him of helping a close colleague's younger brother, a former tax office chief, evade corruption charges in 2015.

Yoon said the allegations regarding his brother had already been sufficiently cleared up, and also responded to accusations of political partiality by saying he had turned down offers from the DP to run for office in next year’s parliamentary elections.

The DP tried to pivot the direction of the hearing by asking Yoon about a bombshell accusation he made in 2013, when he said then-Justice Minister and current LKP Chairman Hwang Kyo-ahn put unwarranted pressure on prosecutors who were investigating a former intelligence chief’s meddling in the 2012 presidential elections. Yoon replied his beliefs hadn’t changed since making the claim, for which he was allegedly held back from promotion by the Park Geun-hye administration.

With the first day of Yoon’s confirmation hearing already exposing clear fault lines between rival parties, the next several days of hearings are expected to bring fiery exchanges between lawmakers over the politically contentious issue of judicial reform.