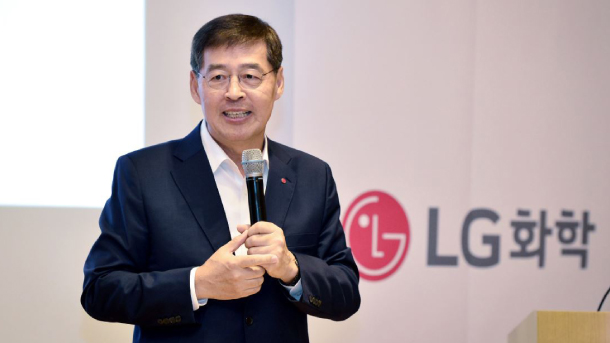 “We believe we can exceed the 30-trillion-won milestone this year - our goal is to double this to 59 trillion won by 2024,” Shin said in a press conference held at the LG Twin Towers in Yeouido, western Seoul, on Tuesday.

“Our management focus will be on enforcing internal operation abilities so that rapid growth can lead to high profitability and profits can lead to investments with high returns.”

For research and development (R&D) investment, LG Chem will spend 1.3 trillion won this year, its largest amount ever, up from last year’s 1.1 trillion won. It will also hire additional researchers, to take the workforce up to 6,200 by the end of this year.

Petrochemicals generated 58 percent of LG’s revenue last year, but EV battery sales, its second-largest business, have been showing rapid growth after two decades of development. Last year, the business accounted for 22 percent of the company’s revenue.

“Batteries will surpass petrochemicals to take up 50 percent of our portfolio by 2024,” he said, adding that this year’s EV battery sales are expected to exceed 10 trillion won.

The growth of the EV battery business will also diversify its client base, Shin says, with China and Korea accounted for a combined 66 percent in last year’s revenue. As a lot of EV battery clients are based in Europe and the United States, the business sector will increase the share of these regions to a combined 44 percent by 2024, double that of last year’s.

Shin also answered questions on sensitive issues surrounding the company’s business. On Korea’s possible removal from Japan’s “white list” of countries that receive trade benefits, he answered the company had already started “planning a scenario based on that assumption.”

“For EV battery components - like anode material, membranes and electrolytes - the company has been pushing efforts to diversify suppliers before Japan’s export restriction issue,” Shin said. “Most of the components we buy externally have multiple suppliers in Korea, Japan, China and, in some cases, Europe.”

He later added that regarding anode material, which LG produces locally, the company is planning to expand production capacity in its factories.

Shin was unwilling to talk about LG Chem’s legal dispute with SK Innovation, saying the matter was undergoing legal procedures. In May, the U.S. International Trade Commission launched an investigation into LG’s claim that SK had unlawfully acquired its battery trade secrets by hiring former employees.

“By the end of this year, LG Chem will be a company that has 70 percent of its revenue coming from overseas and 50 percent of employees located outside Korea,” Shin said, adding that his experience may help the company take its corporate culture and policies to the level of a true global firm.