President Moon Jae-in’s nominee for prosecutor general is in the hot seat after opposition lawmakers revealed a voice recording of him allegedly lying about inappropriate connections during Monday’s confirmation hearing.

Calling for Yoon Seok-youl to withdraw his nomination as prosecutor general, conservative opposition legislators claimed Yoon had “blatantly lied” about not helping the older brother of Yoon Dae-jin, a close colleague and fellow prosecutor, by introducing him to a lawyer with close ties to law enforcement. 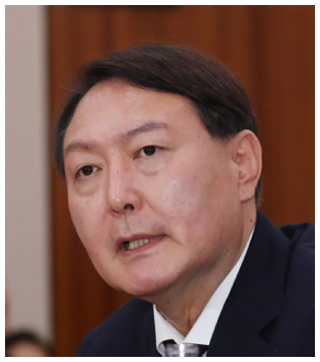 Yoon Dae-jin’s brother, a senior tax officer named Yoon Woo-jin, was accused of taking bribes from a businessman working in meat imports in 2013 but fled the country. He was later arrested in Thailand. After an investigation by prosecutors, he was eventually cleared of any charges.

Yoon Seok-youl, who is currently chief of the Seoul Central District Prosecutors’ Office and was tapped by Moon to be his next prosecutor general last month, denied seven times during a confirmation hearing on Monday that he had introduced Lee Nam-seok, an attorney who had formerly been a prosecutor, to Yoon Woo-jin. Such a contact could be construed as a conflict of interest and meddling with an ongoing investigation. At one point in the hearing, a lawmaker from the main opposition Liberty Korea Party (LKP) brought up a Dong-A Ilbo interview that Yoon Seok-youl conducted in 2012, in which he made remarks suggesting he had made the introduction.

Yoon, however, said the interview contained incorrect information, and again denied the allegation.

But toward the end of the hearing on Monday, LKP lawmakers played an audio recording published online by Newstapa, an investigative journalism outlet, in which Yoon Seok-youl himself told Yoon Woo-jin over the phone that he couldn’t intervene in an ongoing investigation, but that he could instead solicit Lee to take on the case.

Rep. Kim Jin-tae of the LKP raised his voice and accused Yoon of lying throughout the entire hearing, which began on Monday afternoon and continued until early Tuesday morning, while other opposition lawmakers chimed in to question Yoon’s honesty.

To this, the nominee explained there was no issue with a mere introduction since Lee did not take the case and he himself was not in charge of Yoon Woo-jin’s investigation. Yoon Dae-jin also told reporters at a press conference on Tuesday that it was he, not Yoon Seok-youl, who introduced Lee to his brother, and that the nominee had told the Dong-A Ilbo otherwise in 2012 to protect him.

But the damage had been done, with the opposition settling on a reason to deny their approval for Yoon Seok-youl appointment.

On Tuesday, LKP lawmakers who took part in the confirmation hearing held a press conference to demand Yoon withdraw from the nomination. Representatives of the ruling Democratic Party, on the other hand, said the audio recording did little to prove Yoon had exercised undue influence on the investigation in question and that he was the best figure to lead Korea’s prosecutors through institutional reform.

While the issue over his supposed perjury at the confirmation generated controversy made headlines, it is this proposed reform - which Yoon said he was in favor of at his hearing - that may be the real reason the opposition is resisting his appointment.

As prosecutor general, Yoon could quell heavy internal dissent among prosecutors to see through the Moon administration’s judicial reform process, though it remains uncertain how far he concurs with the ruling party’s proposals to curb prosecutors’ authority to lead and close investigations.

What is increasingly certain, however, is that the partisan divide seen at his hearing can be bridged to produce legislative approval of his appointment, though a blessing by the National Assembly is not necessary for President Moon to seat Yoon as top prosecutor.