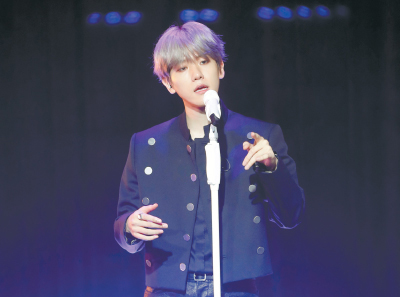 Baekhyun of boy band Exo performs ¡°UN Village,¡± the lead track off of his first solo album ¡°City Lights,¡± for the first time on Wednesday at the SAC Art Hall in southern Seoul. [NEWS1]

Avid Exo fans may soon be visiting a new spot in the nation’s capital - the UN Village in central Seoul - now that member Baekhyun has released his first solo album. “City Lights” dropped on Wednesday, and the six-track EP includes the lead song “UN Village,” as well as five other tracks that have been produced by some of the biggest names in the music scene today.

“I’ve tried to show a side of myself that I haven’t shown before as Baekhyun. I would like people to think, ‘Wow Baekhyun has this side too?’” the singer said at a showcase held on Wednesday at the SAC Art Hall in southern Seoul.

Baekhyun is the second Exo member to release a solo album, following fellow member Chen’s album “April, and a Flower.” Fans were excited for the singer’s solo debut, as evidenced by the fact that the number of preorder sales had exceeded 400,000 on Monday.

“I’ve been a part of Exo and [subunit] Exo-CBX,” said Baekhyun. “But when I thought about working solo, I felt somewhat pressured. Having no members to lean on and showing you who I am on my own made me nervous. But it is finally out, and now all I feel is excited to see how people will like it.”

Any fan listening to “UN Village” will immediately fall in love with the hook where Baekhyun sings that he would like to take his lover to “Hannam-dong UN Village, you and me.” The UN Village is the name of an actual neighborhood in Hannam-dong, central Seoul near the Han River, where Baekhyun would like to “look at the moon on the hill” as if in a scene from a movie.

“Technically, it’s not the UN village, it’s the place behind the UN Village where I would like to take the person that I love,” he said. “But I really like it. Because it’s quite different from the usual title for a song, so a lot of people may be intrigued by the lyrics and the title itself.”

With members of Exo beginning their mandatory military duties in recent days - including D.O and Xiumin - Baekhyun is planning on pursuing his solo career more actively than ever before, with more solo music set to come soon.

As a part of the launch of his solo career, Baekhyun has also opened up a channel on YouTube, where he has posted eight vlogs so far.

Through his videos, he reveals what he does in his time off, including playing with his puppy, working out at the gym and playing games on his computer.

“We’ve achieved so many things as Exo,” he said. “But we know so well that the reason we were able to do so was not because we did well, but because the fans made it possible. And at some point, I thought, can we not give something back to them instead of just receiving? That’s why we took the time to go on social media or film something live. With my vlogs, I wanted to show something that the fans would be more curious about, to pay them back for everything.”

When asked what his ultimate goal is, Baekhyun said, “I want to be remembered by people. So maybe in 10 or 20 years, if people say they remember Exo and Exo’s Baekhyun, [I would be happy]. And that’s also why I keep trying hard - to see that happen.”

He added, “The members of Exo are so close to each other and we sincerely wish each other the best. If that hadn’t been the case we wouldn’t have made it this far anyway. We know what each other are thinking by just making eye contact. I think if we just keep our bond strong like we have done so far, then we will be able to keep Exo going strong.”