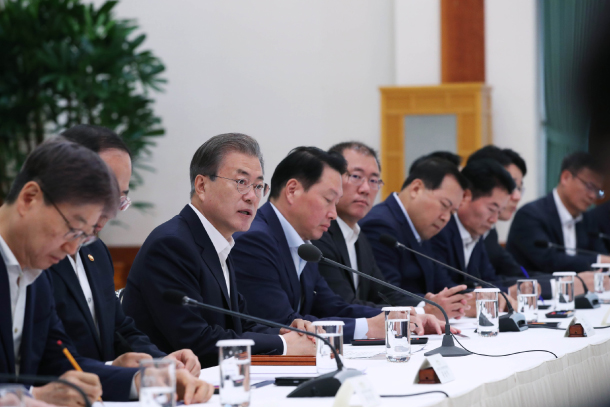 President Moon Jae-in on Wednesday escalated his rhetoric toward Japan, but also urged Tokyo to respond to Seoul’s efforts to find a diplomatic resolution to its serious trade row.

He also asked Korea’s companies to brace for the long-term impact.

Moon met with heads of the nation’s top 30 companies and four major business lobbying groups at the Blue House in the morning to discuss Japan’s restrictions on exports of three key industrial materials to Korea. Leaders of conglomerates with over 10 trillion won ($8.47 billion) of assets were invited.

In opening remarks, Moon said he wanted to address the situation straightforwardly and then listen to the businessmen. “The government has extraordinary determination to make Japan withdraw the unfair export restrictions and prepare countermeasures,” Moon said. “Most of all, the government is doing its best to diplomatically resolve the situation. I hope the Japanese government will respond.

“I hope Japan will stop going toward a dead end,” Moon continued. “For political purposes, the Japanese government took a measure that will damage the Korean economy and even made a groundless accusation [of Korea’s possible violation of] sanctions on North Korea. That is never desirable for the friendship and security cooperation between the two countries.”

Last week, Japan restricted exports to Korea of key materials used in semiconductors and displays, initially as a response to court rulings ordering compensation to Koreans forced to work in factories and mines in Japan during World War II. Tokyo insists that matter was settled with a 1965 pact.

Later in the week, Japanese Prime Minister Shinzo Abe said the measure was taken because of a “trust” issue involving Korea not properly managing trade.

Japanese politicians have gone as far as to suggest that Seoul may have violated sanctions on North Korea and that high-tech materials that can be used for military purposes may have ended up in North Korea.

In his meeting with tycoons Wednesday, Moon said Korea will seek the international community’s support to resolve the situation because the disruption to Korean companies will affect the global economy. While promising diplomatic efforts, Moon told the businessmen to prepare for all possibilities including prolonged friction with Japan.

Calling the situation an “unprecedented emergency,” Moon promised to establish a cooperation channel between the government and the companies. The government will help companies find alternate suppliers of key materials and reduce administrative hurdles to localizing production, Moon said. He also promised to ask the National Assembly’s cooperation to include necessary funds for technology development in a supplementary budget.

Moon said the ultimate goal was significant localization of core technologies, components and materials to reduce Korea’s reliance on imports. “We must improve an industrial structure that is dependent upon one particular country,” he said. “The government will increase budgets to support localization.”

He urged conglomerates to lead the localization initiative and work with small companies.

In his opening statement, Moon made clear that Japan’s measure was politically motivated. Japan will hold an upper house legislative election on July 21, and analysts have said the Abe administration thinks anti-Korean sentiment can help drive votes.

According to the Blue House, all 34 businessmen invited to the meeting commented on the current situation. Taking into account the sensitivity of the trade situation, the Blue House decided to not make public their remarks.

Samsung Electronics Vice Chairman Lee Jae-yong and Lotte Group Chairman Shin Dong-bon sent deputies to the meeting because they were having business meetings in Japan.

Presidential spokeswoman Ko Min-jung said the meeting took about two hours. She said the businessmen promised their support to persuade Japan to withdraw the trade restrictions because they will eventually hurt both countries.

According to Ko, they also agreed with the need to localize production of key materials while diversifying suppliers. Some suggested that cooperation with Russia and Germany should be expanded because of their expertise in chemicals.

Mergers and acquisitions in the component industry were also proposed, and the tycoons asked the president to ease financial regulations so that more money can be invested in new industries rather than conventional, low-risk sectors.

It remains to be seen if Japan will enact additional trade restrictions. Next week, the two countries will face an important turning point for a diplomatic resolution. Japan has asked Korea to form a third-nation arbitration panel to discuss the forced labor issue, and July 18 is the deadline for Korea’s response.

Multiple diplomatic sources told the JoongAng Ilbo that Korea will reject the request.

Aug. 24 is another turning point: The deadline for Seoul and Tokyo to decide whether to extend a bilateral General Security of Military Information Agreement (Gsomia). The pact, signed in November 2016, was supposed to be extended every year. If one of the two countries wants to scrap the pact, it must inform the other 90 days in advance - Aug. 24 in this case.

If Japan decides to scrap the Gsomia, the diplomatic row will rapidly expand because it would amount to a declaration that Korea cannot be trusted in sharing intelligence.

Ahead of that deadline, Moon will make a Liberation Day speech on Aug. 15, which has traditionally been used to set the direction of Korea-Japan relations.

Japan also threatened to make a decision before the end of August to take Korea off its so-called “white list” of countries that are allowed less stringent export restrictions on strategic goods. If Korea is taken off the list, not only chipmaking but also the automotive, appliances and electronics industries will suffer.

Kim Sang-jo, presidential chief of policy, said earlier this week that he has compiled a “long list” of components and materials that can only be imported from Japan, and Tokyo’s restrictions of last week hit the top three items on the list.

The United States has often acted as a mediator at times of friction between Korea and Japan over historical disputes. Deteriorated relations between Seoul and Tokyo puts a damper on Washington’s vision of trilateral cooperation with its allies in Northeast Asia.