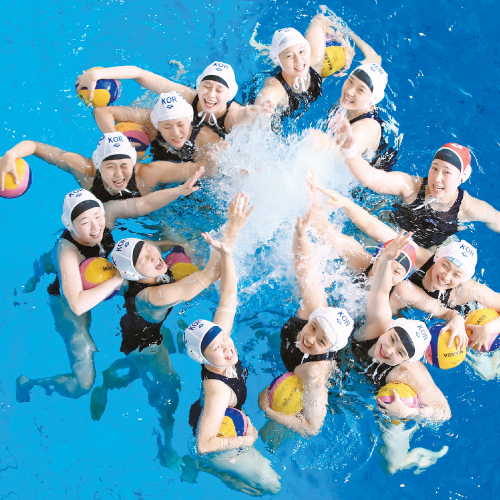 Korean women’s water polo players pose for a photo before training at a pool in Suwon, Gyeonggi, on June 27, in the run-up to the 2019 FINA World Championships in Gwangju. [YONHAP]

About to compete in its first world championships this month, the Korean women’s water polo team will be vastly overmatched against far more established teams.

Scores could be ugly against Hungary, Canada and Russia in the preliminary round of the FINA World Aquatics Championships in Gwangju, but Oh Hee-ji, the Korean captain and goalkeeper, will take it one save at a time.

“Obviously, the talent gap between our team and Hungary, Canada and Russia is huge, but we don’t want to lose by something like 30-0,” Oh said Wednesday after a practice match against a local boy’s high school team. The competition starts Friday. “Our objective is to score one goal. But if we fall behind by 20-0 or 30-0, then it’s going to be so deflating and our attackers will lose their focus. So my job is to keep as many goals out of the net as I can.”

Korea earned a spot in water polo as the host nation. The country didn’t even have a women’s national team, and it hastily gathered former swimmers in May. Oh, a former breaststroke specialist, and the rest of the team began training in early June.

“I ranked as high as fifth nationally in the 50-meter breaststroke in 2017, and I was preparing for a test to become a physical education teacher after graduating from college this year,” Oh said. “I was just playing around with the ball in the pool earlier, and now I am getting ready for the world championships. I never imaged I’d be in this position.”

Oh recently sustained a broken nose when struck by a ball during practice. A few days after she returned, Oh was hit in the nose again. But with the start of the championships around the corner, Oh didn’t even bother to get it checked.

“It hurts, and I may have broken it again, but I don’t want my teammates to worry about me,” Oh said. “It’s such an honor to have this opportunity. What were the odds that we would host the world championships at this particular time when I am playing water polo?”

On the 13-player team, 11 are still in middle school or high school. Oh, 22, said she’s nine years older than her youngest teammate, but insisted she is in a tightly-knit group and she doesn’t feel a generational gap.

Despite the uncertain future after the world championships, Oh said she and the rest of the team won’t look past what’s immediately ahead of them.

“We all signed up for this and we’re going to put in our work until the end of the competition,” Oh said. “We want to show our fans just how hard we’ve worked to get here and that there’s hope for women’s water polo in this country. Hopefully we’ll be able to keep playing water polo after this.”