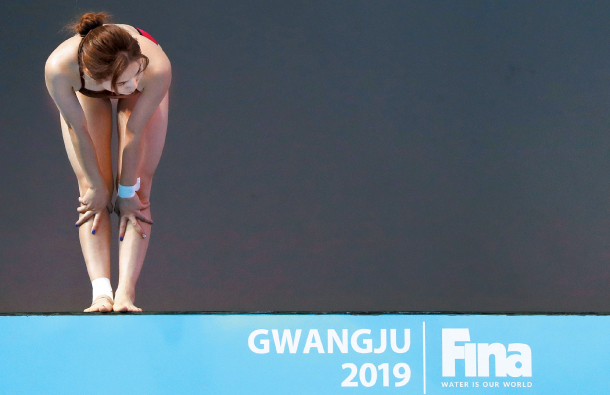 This will be the first time the biennial aquatics event will be held in Korea and the third time in Asia.

The 2019 World Aquatics Championships Gwangju is being held under the slogan “Dive into Peace,” which “signifies the hope to promote the values of peace for humankind in Gwangju, the guardian city of Korea’s democracy and human rights.” The slogan has also been broken down with the five letters of the word “peace” representing “people,” “environment,” “advance,” “culture” and “economy.”

Six aquatic sports - swimming, diving, high diving, open water swimming, artistic swimming and water polo - will be competed in over 76 events during the championships, while only five sports (excluding high diving) will be in contention during the Masters Championships.

Of the 76 gold medals, swimming will have the most, at 42, while there are only two medals - a men’s and women’s - available for high diving and water polo.

The majority of the competitions will be at the main Aquatics Center at Nambu University, as that is where swimming and diving events will be held.

The world’s biggest aquatic event, the FINA World Championships are considered one of the world’s five mega-sports events, along with the Summer and Winter Olympics, the FIFA World Cup and the International Association of Athletics Federations (IAAF) World Championships. By hosting the World Aquatics Championships, Korea will become the fourth country - after Germany, Italy and Japan - to have hosted all five major sporting events.

Korea won its bid to host the World Championships on July 19, 2013, during FINA’s biennial General Congress. Although it’s the first time the country has hosted a FINA event, Gwangju isn’t completely new to the world of international sporting contests. Back in 2015, Gwangju hosted the Summer Universiade aquatics events - the World Championships will be held in the same venues.

In the all-time medal standings, the United States has a dominant lead with a total of 586 medals, followed by China at 296 and Russia at 210. Korea has won a total of three medals throughout the FINA Championships - two golds and one bronze. At the most recent Championships, the 2017 Budapest World Aquatics Championships, Korea failed to win a medal.

Tickets for the championships event went on sale online in January, with prices ranging from 10,000 won ($8.91) to 150,000 won. Tickets for some events are still available through the website https://tickets.gwangju2019.com/en/. Tickets are not required for Masters Championships events.