FDI declines 37.3 percent in the first half

FDI declines 37.3 percent in the first half 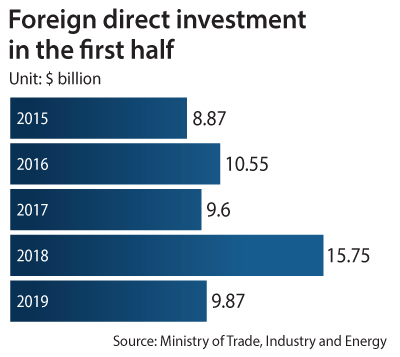 The latest disappointing report was the sharp drop in foreign direct investment (FDI) in the first half of the year.

According to the Ministry of Trade, Industry and Energy, FDI between January and June this year totaled $9.87 billion, a 37.3-percent drop from a year ago.

Actual investment in the first six months of the year totaled $5.6 billion, which is about half of the $10.2 billion during the same period in 2018.

By region, investments from China, which is currently in a trade dispute with the United States, dropped the most. When compared to a year ago, Chinese investment reported in the first half dropped 86.3 percent compared to the same period a year earlier to $300 million. Actual investment dropped 90 percent to $70 million.

The government said the sharp drop of investment from China was largely due to the Chinese government’s restrictions on overseas investments in an effort to limit the insolvency of overextended companies.

Investment from Japan also fell in the first half. Reported investment was $540 million, a 38.5-percent drop. Actual investment halved to $330 million.

The government brushed off concerns over the shrinking foreign direct investment, emphasizing that the first half total was the fourth-largest ever.

“When looking at the average in the last 10 years from 2009 to 2018, this year’s has exceeded that amount,” said Jung Dae-jin, director general of cross-border investment policy at the ministry. “In the long-term, we see it as maintaining an upward momentum.”

Jung said in the first quarter foreign direct investment only amounted to $3.17 billion, whereas in the second quarter it was $6.7 billion. He added that one of the reasons for the big drop in the first half was the strong first half a year earlier.

“As you know, we had unprecedented foreign investment last year,” Jung said. “There have been some exceptional cases, such as GM investing $3.6 billion.”

The director general also noted that the decline in foreign investment is not exclusive to Korea but a global trend.

“Last month, the United Nations Conference on Trade and Development released a statistics on foreign direct investment in 2018,” Jung said. “It wasn’t the most favorable figure in the last 10 years.”

He said globally foreign direct investment had shrunk to the same level as 10 years ago, at $1.3 trillion.

The report came a week after the Korean government revised its growth outlook for this year from the previous 2.6 percent to 2.7 percent to 2.4 percent to 2.5 percent. This is still relatively positive considering some institutions expect that the economy will fail to break 2 percent, especially when accounting the growing tensions with Japan.

The government stressed that despite the overall decline in investment, foreign investors continue to increase their investments in leading technologies and new industries, which generate the most value added.